Only A Monster by Vanessa Len (Monsters #1)

It should have been the perfect summer. Sent to stay with her late mother’s eccentric family in London, sixteen-year-old Joan is determined to enjoy herself. She loves her nerdy job at the historic Holland House, and when her super cute co-worker Nick asks her on a date, it feels like everything is falling into place.

But she soon learns the truth. Her family aren’t just eccentric: they’re monsters, with terrifying, hidden powers. And Nick isn’t just a cute boy: he’s a legendary monster slayer, who will do anything to bring them down.

As she battles Nick, Joan is forced to work with the beautiful and ruthless Aaron Oliver, heir to a monster family that hates her own. She’ll have to embrace her own monstrousness if she is to save herself, and her family. Because in this story . . .

ONLY A MONSTER engages with difference, family, belonging, and monstrosity as Joan, a half-human, half-monster girl witness the massacre of her family by a hero.

The narration focuses on Joan's reactions to various events, often returning to pieces of already-known information as her feelings change in light of new circumstances. It has the cumulative effect that very few things actually happen during the story, and long stretches of time are about processing those events and deciding how to proceed. Aaron's initial disdain transforming into patient support is one of my favorite parts of the book (and is why the ending particularly devastates me). I also like how Tom is a more complicated character than he first appears to be.

This dwells in long stretches of worldbuilding, specifically on snapshots of monster society within human society. Joan marvels at their various waystations, safe places they control for long stretches of time and can get food or supplies for the time where they've arrived. I enjoyed the descriptions as they didn't get bogged down in picky details, but included Joan's thoughts about what she was witnessing. The way the monster powers work is pretty cool, and I enjoyed the various facets of that world. One of my favorite simple details is that they call themselves monsters and that's the end of it. There's no complicated other label for themselves, as they're unashamed of how they live their lives. It's a detail that makes them truly feel like a group whose lives don't revolve around what humans think of them (since humans are little more than fuel to monsters).

I have very mixed feelings about the ending. It uses a trope I've loved at the conclusion of long series, but it leaves me unsure of the direction for the next book. It generates a feeling of immense work that's extremely important but completely invisible to everyone around Joan by the end. The most important thing at the end of the book is how the experience changed Joan, and the specific goal she was able to achieve. The relationships that are built up the most (between Joan and her fellow monsters) are not the ones with the weight of destiny behind them, and I'm nervous for what a sequel could bring. 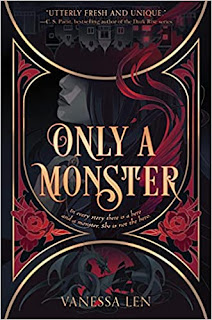