Mercenary Kate Daniels and her mate, Curran, the Beast Lord, are struggling to solve a heartbreaking crisis. Unable to control their beasts, many of the Pack's shapeshifting children fail to survive to adulthood. While there is a medicine that can help, the secret to its making is closely guarded by the European packs, and there's little available in Atlanta.

Kate can't bear to watch innocents suffer, but the solution she and Curran have found threatens to be even more painful. The European shapeshifters who once outmaneuvered the Beast Lord have asked him to arbitrate a dispute--and they'll pay him in medicine. With the young people's survival and the Pack's future at stake, Kate and Curran know they must accept the offer--but they have little doubt that they're heading straight into a trap...

MAGIC RISES plunges Kate and Curran into a multi-pack conflict in Europe, in a castle playing bodyguard to a pregnant shifter whose father has staked territory on her offspring's identities. When the identity of the castle's lord is revealed, things get even more complicated.

This has some wonderful worldbuilding by way of a trip to a castle on the shore of the Black Sea, on the border between Russia and Georgia, providing an opportunity to see the current state of Eastern Europe post-Shift. The plot is pretty straightforward, but the setup to get there is very convoluted. It conveyed the feel that the group from the Pack had walked into someone else's soap opera, complete with a pregnancy involving twins from two different fathers. There are mysterious attackers as well, shifters with a beast form which is something out of a legend. Except, they can't figure out which legend and that makes it a bit harder to figure out where they came from and how to stop them.

This kind of wraps up some things left hanging, by way of making irrevocable status changes in some people (it would be a spoiler to say more). This series tends to be very character-focused in terms of series arcs and plot-focused for individual books, so each story changes certain bits of the status quo in ways that push Kate, Curran, and any other plot-important characters into new roles, competencies, and possibly even permanent injuries. The constraint of a limited group size for the gathering keeps the recurring cast small, while also introducing some characters who I hope can be around more in later books (turns out Jim has a sister, and Mahon's daughter gets a real role rather than a brief mention).

MAGIC RISES specifically leaves some things for later. They're almost all related to foreshadowing future conflicts and changes in the status quo which were caused by events towards the end of their stay. Kate is still the narrator, I'd be surprised if anyone else narrates in this whole series. Her voice is consistent with the previous book, but she's much more thoughtful and less likely to act on her (still very present) impulses as she was early on in the series. By traveling to a completely new location, this book is almost a bottle episode. However, the presence of a particular character is meaningful because of things established back to the start of the series, and specifically called up in Magic Strikes and Magic Bleeds. It might make sense if someone started here and didn't read the rest of the series, since it's demonstrating for the first time some things Kate has only talked about up until now.

I enjoyed this as an individual book and for how it advances a bunch of series arcs all at once. The main storyline in MAGIC RISES is that The Pack have been offered an enourmous amount of a life-changing substance that can help keep their kids from going loup (a death sentence), but they have to travel through the Black Sea and successfully play bodyguard in a very tense situation. Once they arrive, they figure out the shape of the trap they're in but it's too late to get out. The bulk of the story revolves around Kate trying to guard a pregnant woman and find out the identity of their mysterious attackers. Barnabas played a bit more of a role than usual, Derek was present but not nearly as vocal, while Raphael and Andrea were a steadying, competent pair in some truly strange circumstances. Kate and Curran had a conflict which is a kind that really stresses me out, but the reasons they couldn't clear it up earlier are entirely in keeping with both the story and their personalities. 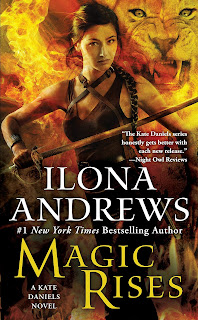