Kitsune shapeshifter Yumeko has one task: to take her piece of the ancient and powerful scroll to the Steel Feather temple in order to prevent the summoning of the Harbinger of Change, the great Kami Dragon who will grant one wish to whomever holds the Scroll of a Thousand Prayers. But she has a new enemy now. The demon Hakaimono, who for centuries was trapped in a cursed sword, has escaped and possessed the boy she thought would protect her, Kage Tatsumi of the Shadow Clan.

Hakaimono has done the unthinkable and joined forces with the Master of Demons in order to break the curse of the sword and set himself free. To overthrow the empire and cover the land in darkness, they need one thing: the Scroll of a Thousand Prayers. As the paths of Yumeko and the possessed Tatsumi cross once again, the entire empire will be thrown into chaos.

SOUL OF THE SWORD picks up where SHADOW OF THE FOX left off, with Yumeko and her remaining party traveling to the Steel Feather temple, and the demon Hakaimono taking Kage Tatsumi's body far away in pursuing its own aims.

The worldbuilding uses what was established in SHADOW OF THE FOX and builds on it, generally explaining things as they come up rather than trying to extemporize. Some things aren't explained but just implied because the other characters have social contexts that Yumeko doesn't, which allows some things to build undisturbed because Yumeko doesn't disrupt them by asking about them. There's one relationship in particular that Yumeko mostly discovers by accident and leaves to develop on its own once she gets an inkling that it exists. The relationships between the characters and the delicate balances of loyalties, promises, and honor-bound obligations which bind them together and propel their journey is just stunning. Each combination of characters has their own dynamic which shifts (usually subtly though sometimes dramatically) as things progress.

I'm so happy about the dynamic between Yumeko, Kage Tatsumi, and Hakaimono. It's not always great for the characters involved, but it's very well written and gains nuance here that wasn't available when Hakaimono was only a disruptive thought in Kage Tatsumi's head. Hakaimono gets to be a much fuller character while Kage Tatsumi fades mostly into the background, reversing their positions from the first book (but this time with the benefit of having experienced Kage Tatsumi's perspective). I'm excited for the novel possibilities opened up by their status at the end of this book, but I have no idea whether it'll actually turn out well for them.

As a sequel, this begins right where the first book left off, with some refreshers of who everyone is, but it continues the action almost straight away. It wraps up the question of what happened next to Hakaimono/Kage Tatsumi after the finale, and also gives more information on a relationship which had glimmers of something more intimate showing by the end of SHADOW OF THE FOX. The new main storyline revolves around rescuing the person who actually knows where the temple they need is, and journeying to the temple to bring together the first and second parts of the scroll. I'm not sure if anything major is introduced and resolved which wasn't present before, since this is part two of a quest they intended to complete in the first book but were unable to. Also, most things which appeared here for the first time clearly will have some continuation and resolution in the final book. This leaves several things for later, some relationships, some internal struggles, and several quest-related items. The main characters are the same, even the audiobook narrators for each character continued as before (one for Yumeko, one for Hakaimono/Kage Tatsumi, and one for Suki the ghost plus any other perspectives as needed).

I don't think this would make sense if someone tried to start here and hadn't read the first book. This is a very character-driven book, with the relationships (and occasional tensions) between the members of the group forming the heart of the story. A lot of their interpersonal dynamics play off of the history of why, how, and when they began traveling together. One very dramatic scene between the noble and the ronin (possibly my favorite) has a depth of emotion and tension which relies on the second half of the first book in addition to most of the second up to that point in order to have its full impact. The plot is a journey story, with the characters traveling to find out a particular location then going on a multi-stage quest to actually reach it, then their arrival prompts a series of conflicts as their pursuers catch up.

I love this series and I'm excited to get to the end, since this really is one giant story split into thirds and I need to know the conclusion. 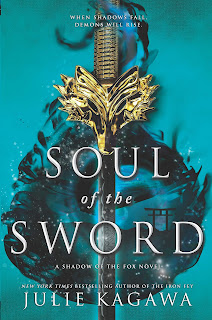