After being kicked out of the Order of the Knights of Merciful Aid, Andrea's whole existence is in shambles. She tries to put herself back together by working for Cutting Edge, a small investigative firm owned by her best friend. When several shapeshifters working for Raphael Medrano--the male alpha of the Clan Bouda, and Andrea's former lover--die unexpectedly at a dig site, Andrea is assigned to investigate. Now she must work with Raphael as her search for the killer leads into the secret underbelly of supernatural Atlanta. And dealing with her feelings for him might have to take a back seat to saving the world...

Andrea is trying to be over Raphael, truly she is, but a murder in one of his reclamation sites forces them to talk to each other after a long silence.

Andrea feels very different from Kate. Despite this being set in the same place with most of the secondary characters shared with the main series, Andrea's narration makes this stand out from the other books. Her focus is much more on the short term and her worries are distinct. She's also still affected from the torturous level of bullying which she endured as a child, and this deals somewhat with the lingering affects of that trauma.

I was all set to highly recommend this, but it has several instances of ableist language which comes out of nowhere and seemed very dissonant with the rest of the book. I do like the story a lot and this isn't enough to justify skipping the book, but it did dampen my enjoyment enough to affect my rating.

This is oddly positioned as a sequel, since it has a different protagonist from the main Kate Daniels books and is set directly after the fifth book (MAGIC SLAYS). Previous books established the turbulent state of Andrea's stalled relationship with Raphael and her attempts to avoid joining the Pack, and these two threads are continued and brought to a new status quo here. Because it's not directly in line with the main series, most of what it leaves for later is the question of what these changes will mean when Kate resumes narrating. In the main storyline Andrea begins investigating four mysterious deaths at one of Raphael's reclamation sites, this and its associated plot points are introduced and resolved within the book. Andrea has a very different narrative voice from Kate, something which is made obvious in the scene which appears from each of their perspectives in this volume: first from Andrea's side in the main novel, then from Kate's in the included novella (MAGIC GIFTS).

It wouldn't make much sense to someone who tried to start here without reading any of the previous books. It relies heavily on books four and five from the main series in terms of worldbuilding and Andrea's relationship with Raphael. It does a pretty good job of providing a refresher and to characterize already established events from Andrea's perspective rather than Kate's. There were several instances where the reader can know more than Andrea does because of what Kate conveyed in the first five books, and several more where Andrea provides more information on things which Kate either didn't know about or which the other books only lightly discussed.

The main plot forces Andrea to handle several stressful arenas of her life which would naturally have a lot of overlap, but which she was thus far attempting to compartmentalize (with varying degrees of success). Her relationship with Raphael is implicitly connected to her identity as a shapeshifter, and her attempt to treat those as two separate things contributed to their relationship's hiatus. Her work at Cutting Edge with Kate means that Raphael ends up as her client, further complicating things. I like how things are handled, the various solutions have a lot of synergy without feeling too neatly wrapped up. I wish the series gave Andrea more books of her own, but since this appears to be the only one I'll happily take it. 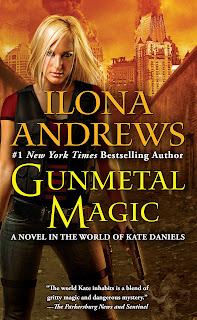