Four of the bestselling names in romance and fantasy come together in this collection of thrilling novellas featuring powerful women who know how to handle a hex or two.

All four stories in HEXED are part of ongoing series and contribute to those stories to various degrees.

“Magic Dreams” takes place before the fifth Kate Daniels book and stars Dali and Jim at the start of their romantic relationship. It establishes enough of the setting to make sense to someone who hasn’t read the main series, as well as clearly indicating what’s happening elsewhere at the time. From having read the main series I have a sense of just how much information was left out, but it would have been confusing extra stuff even though it’s true about the world. I appreciate how succinctly just the important parts were told. I particularly enjoyed Dali’s insight into Kate’s troubles with technology. Highly Recommend.

“Ice Shards” is part of an ongoing series and has a lot of backstory to convey in order to set up this particular story. Unfortunately it makes it feel like a string of nested infodumps and a blur of names. Much of it is flashbacks for things which happened earlier in the main character’s life. This seems like a story which has very little action and a bunch of lore for fans of the main series, but holds little attraction for me. I also dislike the way infertility is wielded as a punishment, with restored fertility as a reward. Not recommended.

“Double Hexed” is set before the third book in the Stormwalker series, and it does a good job of giving enough background to make sense without being overwhelming. The fact that early on the characters become trapped in a building helps to keep the cast small and avoid being just a parade of names. Recommend.

“Blood Debt” is part of the Anna Strong series and takes place after book six, CHOSEN. The plot makes sense even though I haven’t read anything else in the series, and gave me enough of a sense of the main characters to let me decide whether I’d want to read the rest of the books. Recommend. 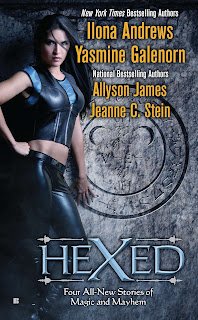