The Ghost Bride by Yangsze Choo

Li Lan, the daughter of a respectable Chinese family in colonial Malaysia, hopes for a favorable marriage, but her father has lost his fortune, and she has few suitors. Instead, the wealthy Lim family urges her to become a "ghost bride" for their son, who has recently died under mysterious circumstances. Rarely practiced, a traditional ghost marriage is used to placate a restless spirit. Such a union would guarantee Li Lan a home for the rest of her days, but at what price?

Night after night, Li Lan is drawn into the shadowy parallel world of the Chinese afterlife, where she must uncover the Lim family's darkest secrets--and the truth about her own family.

Li Lan finds out her father is considering a ghost marriage for her to the recently deceased son of a rich family, then she starts being visited in her dreams by the odious spectral suitor himself.

I like Li Lan as a protagonist. She seems practical and able to go with the flow, adapting to her very strange circumstances even though she's definitely stressed by what's happening. The worldbuilding flows seamlessly, giving context in a way that was appropriate to each moment without making me feel like it has paused for me to catch up. That's helped a great deal by the fact that much of the book functions as a tour of this book's version of the Chinese afterlife, and Li Lan is new to almost as much of it as I was. There's also a lot of detail about colonial Malaysia as a setting, focusing on what's most relevant to Li Lan's life.

The plot has remarkably few pivotal events, as much of it focuses on Li Lan's journey from place to place or her efforts to get some piece of information. It takes a very long time before she has what she needs to change anything, and even then she's trying to get back to the formerly unremarkable status quo of having her spirit reside in her body. Along the way she learns the messy history of her family and the Lim family, the ways they've been frustratingly entangled long before her father considered one of their sons as a potential husband for her. Keeping things complicated, the one he originally considered isn't the ghost suitor but his cousin. Technically by the end there are three different potential suitors, but that develops slowly throughout the book. It manages to not feel like a "girl has to pick between guys book" even though that's an integral part of the premise.

I especially enjoyed the lively cast of secondary characters, both the living and the dead. The tangle of their (after-)lives is a huge focus and was very intriguing (even if rarely happy). 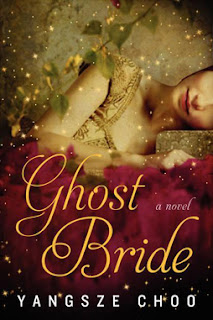