The Storyteller’s Daughter by Cameron Dokey

In a faraway kingdom, a king has been betrayed. Deeply hurt and bitterly angry, he vows never to be deceived again. Unfortunately, the king's plan to protect himself will endanger all of the realm's young women, unless one of them will volunteer to marry the king - and surrender her life.

To everyone's relief and horror, one young woman steps forward. The daughter of a legendary storyteller, Shahrazad believes it is her destiny to accept this risk and sacrifice herself.

On the night of her wedding to the king, Shahrazad begins to weave a tale. Fascinated, the king lets her live night after night. Just when Shahrazad dares to believe that she has found a way to keep her life and an unexpected love - a treacherous plot will disrupt her plan. Now she can only hope that love is strong enough to save her.

This has a storybook style with Shahrazad narrating events in her past. There are stories with in the story as well. Some stories are told completely, while one long one is begun and then finished over the course of the novel, but the middle of it is partly summarized since it's the story that is told over many nights.

The story is very character-based, with the worldbuilding kept fairly sparse. Enough cultural details are given to place it generally in the world and even more loosely in time. Shahrayar and his brother, Shazaman, are rulers who are each betrayed by their wives (who are then killed). Shahrayar's wife curses him to never trust again. Shahrayar's reaction to this unfathomable breach is to declare that he will marry a new woman each month and then kill her in the morning, thus ensuring his continued access to marriage without the possibility that any of his sequential brides would get close enough to him to betray him. Shahrazad is the daughter of the storyteller, wife of the vizier, who grows up to be a storyteller herself. When she learns Shahrayar's plan she conspires with her father and sister to become the first of the planned brides and stay alive by telling a long and interesting story. This basic starting point continues in a simple but compelling manner, as Shahrayar and Shahrazad both have to learn to understand themselves.

I like how neither Shahrayar nor Shahrazad is positioned as the hero above the other. They're both essential to this turning out well, and they both have to learn similar lessons in order to fix the ruinous situation. There are additional twists and deceptions, keeping this engaging even though it's slow-paced for such a short book. 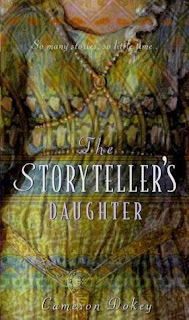