An alien armada lurks on the edges of Teixcalaanli space. No one can communicate with it, no one can destroy it, and Fleet Captain Nine Hibiscus is running out of options.

In a desperate attempt at diplomacy with the mysterious invaders, the fleet captain has sent for a diplomatic envoy. Now Mahit Dzmare and Three Seagrass—still reeling from the recent upheaval in the Empire—face the impossible task of trying to communicate with a hostile entity.

Their failure will guarantee millions of deaths in an endless war. Their success might prevent Teixcalaan’s destruction—and allow the empire to continue its rapacious expansion.

*I received a free review copy as part of 2022 Hugo awards voting.

A DESOLATION CALLED PEACE is a collision of cultures bleeding into war, trying to find the bounds of personhood in more than flesh and bone.

The plot follows several parallel threads, centering on various characters. I love Twenty Cicada’s storyline. He’s one of my favorite characters, followed closely by Eight Antidote. Mahit and Three Seagrass are working together again, this time to find a way to communicate with the aliens whose proximity Mahit had used as leverage in the previous book. The worldbuilding focuses on intra-empire politics as much as it focuses on the empire’s communications with Mahit and with the aliens. It balances stress and war with levity and intimacy, exploring connections and communication as characters with conflicting methods and competing aims collide.

This answers a few things left hanging from the first book, showing the next steps without closing much off. There’s a new storyline involving aliens which is almost entirely new (the existence of those aliens was pivotal in Mahit’s big move at the end of A MEMORY CALLED EMPIRE). A few major things involving those aliens are both introduced and resolved. It specifically leaves aspects of Mahit’s relationships to other characters to be resolved later, but with substantial changes from how they were at the start of the book. Some of narrators are the same, with the addition of a new perspective between sections. I don’t think Eight Antidote was a narrator last time, if he was it was brief, but he, Mahit, and Three Seagrass are all narrators this time.

This story likely wouldn’t make sense to anyone who hadn’t read the first book. Because Mahit was on her first journey as an ambassador last time, A MEMORY CALLED EMPIRE had a lot of exposition which could fit naturally into that story. A DESOLATION CALLED PEACE is therefore (assuming one read the first book) free to focus on building up descriptions of the fleet, the Shards, and the aliens, leaving the Empire and its basic details to be shown but more rarely explained.

The ending utterly devastated me, wrapping up the main story and leaving me sated, but promising more in the vast future now made possible by the resolution. 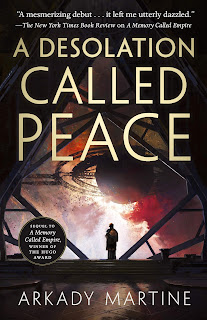