Connor, Risa, and Lev are running for their lives.

The Second Civil War was fought over reproductive rights. The chilling resolution: Life is inviolable from the moment of conception until age thirteen. Between the ages of thirteen and eighteen, however, parents can have their child "unwound," whereby all of the child's organs are transplanted into different donors, so life doesn't technically end. Connor is too difficult for his parents to control. Risa, a ward of the state, is not enough to be kept alive. And Lev is a tithe, a child conceived and raised to be unwound. Together, they may have a chance to escape and to survive.

UNWIND is a dystopian future where abortion is outlawed but teenagers can be "unwound", a state which is distinct from death in ways that are legalistic, technical, and horrifying.

I liked and I'm looking forward to how the sequels (hopefully) develop and complicate the world. UNWIND has a specific and pretty interesting plot, but narratively it does the heavy lifting of a kind of tour, showing all the different facets of existence for someone impacted by the unwinding, the ways that this deeply flawed plan has cracked and broken the people under it. The main characters are slated to be unwound, some willingly and some not, but the mix of perspectives combine to show just how fucked up the whole system is. Secondary characters get a few chapters and even minor characters might get one to show how everything in their world is bent by this paradigm.

In a book meant for teens, it's especially poignant that since Unwinds are always children the majority of recipients of their organs will be adults. This sets up a paradigm where the old are preying on the young in a visceral way. Page counts are lower in YA, and part of what makes this world so immersive are the little things. Even something as simple as recipients continually referring to the donated organs and body parts as if they don't belong to them, they belong to the person who was unwound, it creates this sense of disassociation. There's a character who received a lung and consistently draws a distinction between himself and this lung that's in his body but isn't his, it belongs to some other kid who was unwound. This distinction is one of horde of tiny details in how everyone is committed to the idea that the unwound are that, unwound, a state that is somehow distinct from state-sanctioned murder plus organ donation on the basis that a bunch of people said so and everyone plays along. 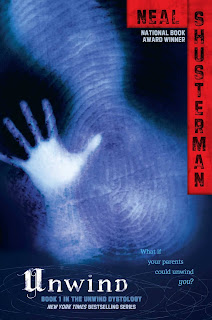