Kitsune shapeshifter Yumeko has given up the final piece of the Scroll of a Thousand Prayers in order to save everyone she loves from imminent death. Now she and her ragtag band of companions must journey to the wild sea cliffs of Iwagoto in a desperate last-chance effort to stop the Master of Demons from calling upon the Great Kami dragon and making the wish that will plunge the empire into destruction and darkness.

Shadow clan assassin Kage Tatsumi has regained control of his body and agreed to a true deal with the devil--the demon inside him, Hakaimono. They will share his body and work with Yumeko and their companions to stop a madman and separate Hakaimono from Tatsumi and the cursed sword that had trapped the demon for nearly a millennium.

But even with their combined skills and powers, this most unlikely team of heroes knows the forces of evil may be impossible to overcome. And there is another player in the battle for the scroll, a player who has been watching, waiting for the right moment to pull strings that no one even realized existed...until now.

NIGHT OF THE DRAGON is the heart-wrenching conclusion to a fantastic trilogy. Full of action, intensely personal moments, and just the right amount of heartbreak.

I love all the characters, particularly Daisuke and Yumeko. The antagonists are well-written, and the reveal of the big bad was foreshadowed since at least the second book (with some minor hints in the first). Even though their villainous identity and plan aren't revealed until the almost the end of the trilogy, that plan makes sense in the context of the world, and their villainous motivations are consistent with what's known about them so far. The style of the foreshadowing means that most of the protagonists weren't in a good position to even guess at their identity or plan, but to the audience it should be a suitably satisfying reveal.

The worldbuilding is expanded a little, but it's mostly building on what the first two books established. I remain particularly devastated (in the best possible way) by the final battles, specifically how Okame (the ronin) and Daisuke (the noble) are handled. I love their storyline and their resolution is completely appropriate to them as characters. Yumeko and Hakaimono/Tatsumi also got very full storylines, but I feel like Reika is a bit sidelined in this book. She was needed more in SOUL OF THE SWORD to get to their destination, but in NIGHT OF THE DRAGON she feels less important to the plot. This is a very character-driven series, and she definitely matters to the group's overall dynamic, but being the odd one out with two couples (each a very different kind of slow burn) means she doesn't have as many moments that stand out to me. Even Suki, a ghost that doesn't even meet up with them until the second half, feels nearly as intertwined with the party because of her connection to Daisuke.

As a sequel (and the final book in the trilogy), this wraps up many things which were left over from the previous books. It addresses the melding of Hakaimono and Tatsumi, gives resolutions to everyone in the party, follows up on all those promises to die together in glorious battle, and gives a taste of the path forward for the region after the Wish. This is a new phase of the storyline, now that it's too late to prevent the scroll from falling into the wrong hangs, the party tries to stop the dragon from being summoned and the Wish being spoken. I don't think there's a major thing that's both introduced and resolved, but it's the final book so it doesn't need to start anything new to feel complete.

Generally the narrators feel consistent with the previous book. The trio of audiobook narrators continue their stellar performance, the audiobook is a delight. The combined person of Hakaimono and Tatsumi is distinct from when either of them was the main one in control (Tatsumi in SHADOW OF THE FOX, and Hakaimono in SOUL OF THE SWORD). I love books which alter the narrator in some fundamental way which affects how they behave, but has a continuity of person which makes that changed version distinct from just being a different character together. This is an excellent example of that, and I'm pleased with how that narrative is handled.

It would not make sense to start here, as this is the final volume of a very character-driven trilogy. While the basic plot might make sense, the driving emotions and motivations were set up in previous books and wouldn't have nearly the intended impact if this is read without any reference to the rest of the series.

I love this book and I'm extremely satisfied with this ending to the trilogy. Read this series for lovable (but possibly doomed) heroes on a quest where the stakes are the fate of the next thousand years. 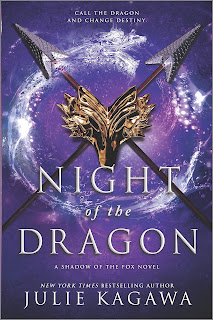