It's 1989 in New York City, and for three teens, the world is changing.

Reza is an Iranian boy who has just moved to the city with his mother to live with his stepfather and stepbrother. He's terrified that someone will guess the truth he can barely acknowledge about himself. Reza knows he's gay, but all he knows of gay life are the media's images of men dying of AIDS.

Judy is an aspiring fashion designer who worships her uncle Stephen, a gay man with AIDS who devotes his time to activism as a member of ACT UP. Judy has never imagined finding romance...until she falls for Reza and they start dating.

Art is Judy's best friend, their school's only out and proud teen. He'll never be who his conservative parents want him to be, so he rebels by documenting the AIDS crisis through his photographs.

As Reza and Art grow closer, Reza struggles to find a way out of his deception that won't break Judy's heart--and destroy the most meaningful friendship he's ever known.

LIKE A LOVE STORY is about three teens trying to hang on to friendship and find love during the AIDS crisis, finding space for joy when the world wants so much for them to die. It's a messy story about imperfect people living through an especially terrible time to be gay*.

*I said "gay" not "queer" because the book seems to only know about gay men, more on that later.

I kept feeling jostled, uncomfortable when reading this, but mostly in a good way. The three MCs have very different perspectives, different assumptions about each other. One MC is fat and unabashedly loves food but deals with a lot of fatphobia and insecurity about how other people see her. I wish she'd had moments of food joy which weren't tainted by someone judging her in the moment, or her worrying about what other people were thinking. The gay and out MC deals with homophobia towards his gay identity and with the specter of what people around him think AIDS could mean, as well as what it actually means for his older gay friends who are dying of it. The gay and closeted MC (who is Persian) deals with racism and microaggressions about his background, and has internalized homophobia which means he’s both being hurt by other people’s homophobic reactions to the idea of gayness and turning that around into homophobic reactions towards other people because he doesn’t know what else to do. It makes for an emotionally complex but also sometimes exhausting read, as the white characters are racist, the straight characters are homophobic, and the thin characters are fatphobic. It’s set up to have no one be perfect, but it also means that early on there aren’t many emotional respites from the bigotry, though this did improve as the narrative progressed.

The AIDS crisis and the gay men dying from AIDS are a prominent feature of the story, along with homophobic reactions to AIDS and the idea of it. The closeted MC is assumed to be straight when he’s actually gay, and no one considers for even a second the possibility that he could be bi (as far as I'm aware, "bi" was a label in use during the late eighties/early nineties but "pan" wasn't yet), anything that would make it feel like he has choices beyond “be in the closet and date the girl” or “be out and date the guy”. I don’t mean that he had to actually be bi or pan, just that no characters even consider that as a possibility. The idea that he could like both of the other MCs doesn’t occur to anyone, and it means his desire for other people is treated as the coveted object in a zero-sum game. I know this is set before the split attraction model was codified, but still, it’s so frustrating to see him do everything but scream “I’m homosexual and biromantic” and get rejected for so long for not being heterosexual (by the girl) and for not being strictly homoromantic (by the guy). My frustrations with the book were mostly about what wasn't quite in it but was a breath away, like the stark absence of queer women (who were also dying of AIDS in real life). There were two mentions of queer women in the entire book and neither of them seemed to acknowledge that AIDS affected them too. This didn't need to be everything, but since a lot of the narration made room for PSAs seemingly designed to make sure that it conveys a lot of the history of this very real epidemic which was ignored and mocked at the time, it stings to feel bi/pan erasure when reading. It also struggled in its handling of the fat character. She's... body-neutral, I guess? Her fatness seemed to exist mostly to have her have a "flaw" that isn't a flaw, just like being gay or being Iranian aren't flaws, but they can draw the ire of bigots when in homophobic and xenophobic settings.

I liked the second half better, maybe I just got used to the characters or maybe they'd gotten the frustrating love triangle stuff handled enough to let the story breathe a little more, since I'm not a huge fan of love triangles, especially ones built on miscommunications and lies. I cared a lot more about the way the friendships bend and whether or not they break. The epilogue was sad and jarring, I'm glad to know how the characters end up, but it was an appropriately bittersweet way to end this sad and hopeful story about people just trying to live and love. 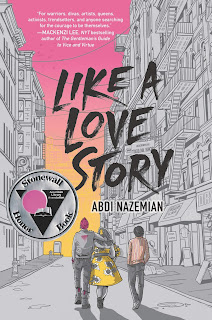