We are Totally Normal by Naomi Kanakia

WE ARE TOTALLY NORMAL meanders from party to party as Nandan tries to figure out what it means that he hooked up with his friend Dave and liked it.

The MC is trying to figure out his sexuality, struggling to put words onto his feelings and to align those feelings with his actions. I appreciated that characters around him offer labels that might fit him but (with very few exceptions by characters the book doesn't like much anyway) don't try to keep labels on him. It offers the words in case the reader finds them resonant, but also allows the character to not be ready for that specificity quite yet.

This is very character driven, with the added layer that the MC is trying to figure out what to do to drive positive interactions between his friends/classmates at the seemingly endless stream of parties, hookups, and hangouts that is his high school experience. Only a couple of things really *happen* but the ways in which things almost happen, do happen, don't happen, or are assumed to have happened but the MC was totally wrong are absorbing and engaging. Short on plot, long on vibes, and full of heart, WE ARE TOTALLY NORMAL takes seriously how big everything feels in that last year of high school before official adult things start happening; knowing that things don't have to last forever in order to matter, but they also don't have to stop quite yet. 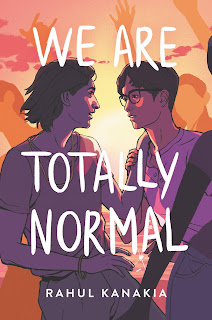 Across The Green Grass Fields by Seanan McGuire (Wayward Children, #6)