Exit, Pursued by a Bear by E.K. Johnston

“I love you,” Polly says suddenly when I’m almost to the door.

Hermione Winters has been a flyer. She’s been captain of her cheerleading team. The envied girlfriend and the undisputed queen of her school. Now it’s her last year and those days and those labels are fading fast. In a few months she’ll be a different person. She thinks she’s ready for whatever comes next.

But then someone puts something in her drink at a party, and in an instant she finds herself wearing new labels m ones she never imagined:

Even though this was never the future she imagined, one essential thing remains unchanged: Hermione can still call herself Polly Oliver’s best friend, and that may be the truest label of all.

Heartbreaking and empowering, Exit, Pursued by a Bear is the story of transcendent friendship in the face of trauma.

EXIT, PURSUED BY A BEAR is about a girl reclaiming her agency, and the friendships which help her before and after; a story about a rape which does not make the reader watch violation. The framing and emphasis centers the MC in a way that acknowledges that she was victimized, and is about what happens after, but is never interested in seeing her suffer. It conveys the raw and sometimes tumultuous emotions of the MC, usually in ways that show either her messy initial reaction and then revisit the thoughts again when she’s able to talk to someone and get help. I never felt like a voyeur to her pain, more like someone who is hearing her reflections on this experience later. It’s about her senior year: the last year of high school, her last year as a cheerleader, and her complicated emotions about having this transitional phase in her life made stranger by this thing that was done to her.

There are a lot of moments I loved in this book, but I think one of the most important ones is the prologue, a snapshot of a small moment which actually takes place midway through the book, but frames the early events so that the reader has an idea from the start that the MC will be okay. That prologue told me that the author was writing this with care. This let me trust that this would be handled well, and I was not disappointed. The MC's relationship with her best friend was a steadying touch in bleak moments, and though I think the prologue is important, the scenes with Polly were the emotional touchstone keeping everything together even as things changed. 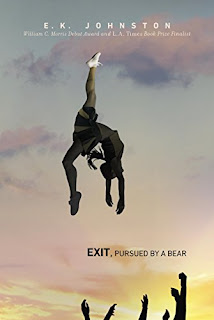