Changeling knight in the court of the Duke of Shadowed Hills, October "Toby" Daye has survived numerous challenges that would destroy fae and mortal alike. Now Toby must take on a nightmarish new assignment.

Someone is stealing both fae and mortal children—and all signs point to Blind Michael. When the young son of Toby's closest friends is snatched from their Northern California home, Toby has no choice but to track the villains down, even when there are only three magical roads by which to reach Blind Michael's realm—home of the legendary Wild Hunt—and no road may be taken more than once. If she cannot escape with all the children before the candle that guides and protects her burns away, Toby herself will fall prey to Blind Michael's inescapable power.

And it doesn't bode well for the success of her mission that her own personal Fetch, May Daye—the harbinger of Toby's own death—has suddenly turned up on her doorstep...

The first two books had me thinking that this was just going to be a fae-based murder mystery series, and I was absolutely here for that. What book three gave me is something even better, and I hope that the series stays in the path that has been set for it by AN ARTIFICIAL NIGHT. The beginning of the series told me that the fae are capricious and scary and otherworldly. And they showed me that, they truly did, for I had no complaints about the nightmares that I found in the first two volumes. But this third book dragged me shaking through blood and candlewax and terror, and I wonder if it’ll ever let me go.

I knew this story was on to something rather special when I was halfway through the book and the plot had just reached the point that I thought would have been the end of the story. But magic things come in threes and I ought to have remembered that. The thing that makes this book a turning point for the series and not just for the main character is that it finally makes unavoidable the mind-numbing, body horror, brain-melting, bloody terror that is a faery in their own domain. The cold trickle of fear at realizing that They can leave their lands and come Here.

The fae have been in the human world in the other books, and the intersection of the mundane with the magical is at the heart of the series, but this is something dark and broken and uninvited that doesn’t know how to touch the world without breaking it even more. Something that has no desire to try, but instead delights in the torturous dark. Toby has had something of a death-wish until this point, a trait that’s been remarked upon in the previous entries. But there’s a switch that needs to happen if you want to believe that your quasi-suicidal protagonist could keep going in a series that’s now up to book fourteen. Of course in book three the author wouldn’t know that much of the publishing future, but this necessary pivot lets this future happen. There is a very specific change in Toby, executed so beautifully that I don’t want to spoil it. Not that she suddenly switches to sunshine, flowers, and talking about how great life is or anything, for that would’ve been a different character rather than a transformed one, but there are some moments where she has to face the idea that her life might be better spent living than constantly looking for a heroic way to die. Toby’s relationships with various secondary characters are this beautiful slow burn moving throughout the series, an emotional core that keeps me coming back. It feels like they’re there in another room having these relationships and I want to see what happens. It’s why even though the plot of each book is pretty self contained thus far, to understand how her relationship with Tybalt, Mitch and Stacy, Quentin, or anyone at Shadowed Hills got to this point, you ought to read this whole series.

This doesn't quite wrap up anything left hanging from the previous book, but it continues development on several ongoing and fascinating interpersonal relationships that Toby has with various secondary characters. Almost the entire plot starts in this book and wasn't present in the last one, with several extremely major things introduced and resolved within. Like the last one, it doesn't really leave specific things to be addressed in the future, but the depth and slow-burning pace of the relationships in this series mean that even if I don't know what they'll do in the next book, I want to see these characters do something, anything, because it'll be fascinating to watch. The MC didn't change from the previous books — since the series is named for her I'd be surprised if she ever weren’t the main character — and her narrative voice is consistent with the previous books (though almost all of the casually ableist language which marred the previous books is absent here, which is a relief). As part of reading this long-running series I'm keeping track of the Major Things Which Are Present But Not Re-Explained, with the intention of tracking how easily a random reader could pick up this particular volume and have a good reading experience. As far as I can tell, everything you need to know in order to understand why people are there and why something is happening is explained, often startlingly succinctly, right as you need to know. The only thing I can think of is it doesn't explain how Sylvester came to be Toby's liege. But since it does explain that he is her liege and shows really well what that entails, I don't think a random reader would notice the missing explanation. Overall I think this would make sense if someone started with this book and didn't already know about the series, provided that this wasn't their introduction to Faerie. If it is, wow, this one is a lot, as I discussed earlier, and it's definitely a shocking introduction to the fae if this is how you first meet them.

Tiny flickers of ableism remain this time around, and the idea of insanity is still very present when discussing the villain, but not to the degree of the last story. The villain, "Blind Michael", isn't scary because of his blindness, it didn't seem to me like it was played for grotesqueness. He's terrifying in ways that have nothing to do with his literal sight, or lack of it. He's also very literally not sane, not in the sense of having a specific mental illness, but that what he's doing is so far outside the bounds of human ideas of what is sane or reasonable that "insane" is the fastest way to describe it. I don't know if that's good, necessarily, and as much as I'm very happy to see a lot of the casually ableist language from earlier books go away, I don't know what it would take for terms like "insane" or "crazy" to naturally vanish from the series, given the unreality of faerie and how difficult it is for human-aligned minds to grasp. This time it definitely felt like "insane" was describing what he did, not why he did it, which was a welcome change from how the last book's antagonist was treated in the resolution. 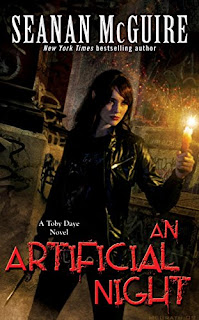