The Lost Coast by A.R. Capetta

The spellbinding tale of six queer witches forging their own paths, shrouded in the mist, magic, and secrets of the ancient California redwoods.

Danny didn't know what she was looking for when she and her mother spread out a map of the United States and Danny put her finger down on Tempest, California. What she finds are the Grays: a group of friends who throw around terms like queer and witch like they're ordinary and everyday, though they feel like an earthquake to Danny. But Danny didn't just find the Grays. They cast a spell that calls her halfway across the country, because she has something they need: she can bring back Imogen, the most powerful of the Grays, missing since the summer night she wandered into the woods alone. But before Danny can find Imogen, she finds a dead boy with a redwood branch through his heart. Something is very wrong amid the trees and fog of the Lost Coast, and whatever it is, it can kill. Lush, eerie, and imaginative, Amy Rose Capetta's tale overflows with the perils and power of discovery — and what it means to find your home, yourself, and your way forward.

THE LOST COAST is a sapphic story about grief, trust, and belonging, following a group of queer witches as they enlist a new girl's help to find their missing member who is somewhere near but achingly far away.

I love the way the narrative twists through time and shifts between point of view characters, it’s the feeling of being here but not here, a little bit lost but not all the way broken, that really captures the essence of the story. It’s messy and tangled and full of longing in all the best ways. Every chapter lists the point of view characters and the time frame, so it was pretty easy to follow even as those things kept changing, always coming back to now and back to Danny, as she is the central thread that holds the rest of it together even as she’s new to this place and these people.

The characterization is really great, I especially like how sometimes the “character” is “The Grays” as a group, Because sometimes the ways in which they are together are the point, and sometimes what matters is what each of them thinks separately, even when that isn’t always clear. especially early on when Danni isn’t yet one of The Grays, not quite part of the group, having these sections where they were a unit seeing her see them helps build that sense of separateness between Danny and The Grays so that later developments in the story feel like something coming together.

I have a LOT of questions about what the heck they'll do after this, but the ending feels good and definitely fits the story and the characters. It's not neat and tidy, their difficult problems have some complicated solutions and they'll have a lot to work out after this, but the story felt satisfying. 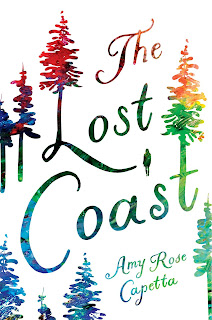