In the sequel to The Fever King, Noam lvaro seeks to end tyranny before he becomes a tyrant himself.

Six months after Noam lvaro helped overthrow the despotic government of Carolinia, the Atlantians have gained citizenship, and Lehrer is chancellor. But despite Lehrer's image as a progressive humanitarian leader, Noam has finally remembered the truth that Lehrer forced him to forget--that Lehrer is responsible for the deadly magic infection that ravaged Carolinia.

Now that Noam remembers the full extent of Lehrer's crimes, he's determined to use his influence with Lehrer to bring him down for good. If Lehrer realizes Noam has evaded his control--and that Noam is plotting against him--Noam's dead. So he must keep playing the role of Lehrer's prot g until he can steal enough vaccine to stop the virus.

Meanwhile Dara Shirazi returns to Carolinia, his magic stripped by the same vaccine that saved his life. But Dara's attempts to ally himself with Noam prove that their methods for defeating Lehrer are violently misaligned. Dara fears Noam has only gotten himself more deeply entangled in Lehrer's web. Sooner or later, playing double agent might cost Noam his life.

It is nearly impossible to discuss THE ELECTRIC HEIR without minor spoilers for THE FEVER KING, so here's the short version if you are trying to figure out whether this is the duology for you. THE FEVER KING is the story of Noam, an immigrant kid in a post-apocalyptic version of the former Carolinas in the USA where a plague is killing many and bestowing the few survivors with magic, gaining powers and favor from the ruler of the region as he slowly gets closer to him and becomes more and more entangled in his political games, while also learning how to use his new abilities. Along the way he gets close to the ruler's ward, Dara, and must decide what to do after a series of devastating revelations and some pretty brutal choices. THE ELECTRIC HEIR picks up six months later and deals with how Noam lives with himself and deals with the fallout from his actions in THE FEVER KING, with less of a focus on learning powers or building comradery with his fellow students, and more of a focus on figuring out that what is happening to him is abuse. If this sounds like a great story then I recommend pausing here and reading THE FEVER KING, because spoilers for that book will abound from here.

This is technically a story about revolution and toppling a dictator, but at its heart it's a story about two kids and their friends helping each other take down their abuser who's running the country. This series deals with child abuse (including but not limited to incest) where there is a massive power imbalance due to the age gap, mentor/student relationship, and the fact that the abuser is legally in charge of the government. There are many discussions between the previous and current victim where we see the viewpoint of someone who has escaped and never wants to be back there again, and someone who hasn't yet figured out how to leave. Some of my favorite sections were between these two characters, whether or not the particular conversation dealt with the abuse specifically, because it shows an immense amount of care from the author to spend so much time showing these characters trying to process and maybe even heal.

Where THE FEVER KING appeared at first to be a heroic teamup/ensemble story before slowly becoming... not that, THE ELECTRIC HEIR has no pretense that Noam will maintain a normal existence. Its focus from his perspective is entirely on his personal interactions with the antagonist, his mentor/abuser, and his work with the resistance to try and topple that abuser from power. While he is technically going to classes and undergoing training, the mentions of these slices of normality gradually disappear, replaced with the descriptions of the flimsy excuses which are increasingly all he has to offer to his friends. The narrative bends towards his attempts to get back any sort of control in his life, and his sense of powerlessness when every attempt keeps being predicted, foiled, or somehow stymied. In the first book Noam was watching as what he thought might be abuse was happening to someone he was getting to know, here it becomes harder and harder to avoid the notion that he now occupies the same position Dara once did. Speaking of Dara, this time around we get Dara's perspective in alternating chapters with Noam. I love Dara as a narrator, he feels very different from Noam and helps to shake up the sense that Noam is right all the time, since he demonstrably is not but is so resolute that it can be easily to feel like he must be right since he's narrating. The dynamic between Noam and Dara is layered and complex, as Noam is torn between maintaining a pretense of loyalty to his abuser (who is not Dara, to be clear), and the unavoidable notion that he is helping his abuser exert power on others even as he is making moves to get out. It makes explicit the abuse first implied and partially shown in THE FEVER KING, and, just as importantly, discusses how the abuse is not his fault, it's neither his nor Dara's fault.

I found this to be empowering and cathartic without trying to be happy, which was welcome because it left space for things to be bad and then also hope that they could get better, but not pretending that everything is magically fixed when the abuse stops. Dara offers a vision of what Noam could look like with a little time free but still not all the way better yet, while Dara sees some of his past self in Noam and keeps trying to get him out. It's not sugar-coated or joyous, and they'll have a long road ahead when the book is done, but it feels like they have a chance. 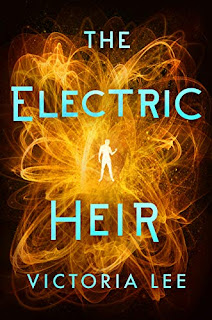