October "Toby" Daye is a changeling, the daughter of Amandine of the fae and a mortal man. Like her mother, she is gifted in blood magic, able to read what has happened to a person through a mere taste of blood. Toby is the only changeling who has earned knighthood, and she re-earns that position every day, undertaking assignments for her liege, Sylvester, the Duke of the Shadowed Hills.

Now Sylvester has asked her to go to the County of Tamed Lightning—otherwise known as Fremont, CA—to make sure that all is well with his niece, Countess January O'Leary, whom he has not been able to contact. It seems like a simple enough assignment—but when dealing with the realm of Faerie nothing is ever as simple as it seems. Toby soon discovers that someone has begun murdering people close to January, whose domain is a buffer between Sylvester's realm and a scheming rival duchy. If Toby can't find the killer soon, she may well become the next victim.

A LOCAL HABITATION picks up soon after ROSEMARY AND RUE with Toby sent to solve a communication problem for Sylvester, ending up desperately trying to keep a shrinking group of fae and changelings alive in a knowe stalked by death. If you liked ROSEMARY AND RUE you'll probably love this too, it has a different scope and pace while keeping the murder mystery core and faery capriciousness.

This is a strong sequel with a fantastic locked house murder mystery setup in a fae-centric version of the modern world. I figured out one of the mysteries involved because it happened to involve a trope I love very much, but the main story genuinely kept me guessing as to the identity of the killer all the way up past the 90% mark. The story is very well contained, with strong continuity from the first book, but not requiring someone to have read the first one recently enough to remember extremely well before starting this one. As with any sequel, certain things will be more impactful and way more interesting if this is a continuation of the series for you rather than your introduction. I love the MC, she has the feeling of someone who likes explaining things, and a casual manner of narration that means even her longer explanations didn’t feel like infodumps. Because I did read the first book, I noticed so many places where we could have just been handed detailed recaps of events from the first book and they would have slow down the story, instead the MC’s explanations stayed focused on the most essential features of those prior events, which usually was their emotional impact and not what literally happened. It was deftly done, very fun to read, and I think it was generally enough explanation that a reader could enjoy this book either randomly by itself or as an entry in a series (since it is book two), just as long as this isn’t their very first time reading a book starring fae.

Time for the sequel check! This doesn't really wrap up anything left hanging from the first book, but it does continue at least five key relationships which were previously introduced. They weren't really left hanging, but the continuity is welcome and I'm excited for the slow burn of the MC's relationships growing and changing. The main story (murder mystery) exists entirely in this book and wasn't present in the first one, and it's resolved here too. There aren't really events left to be wrapped up later, but it drops in a few teasing notes about an ongoing thing which feels like it'll take several more books before it's time to be properly addressed. The style of this series feels like it's headed for a "murder mystery every book" sort of cadence, which I quite enjoy, so the main threads of continuity are in the people Toby cares about in her life, the ones for whom she would drop everything and either solve or try to prevent murder. Toby is still the narrator and her voice is consistent with the first book.

Because this is a long-running series and I intend to read the whole thing, I’ll keep an informal running tally of things which it’s useful to know for continuity between books, but aren’t re-explained. I’m not a wiki so this won't be exhaustive, but it’ll help me with my sequel check to figure out if a reader could pick up each book at random and still have a good time. This time around, the Major Things Which Are Present But Not Re-Explained are: how October is connected to Sylvester; and who Devin, Dare, and Manuel were. You can absolutely enjoy the book without this backstory, but there's an immensely cathartic scene which relies on one of these pieces of information, so I definitely recommend starting the series from the beginning rather than jumping in here on book two.

The story is marred slightly by some ableism from the MC which had a small presence in the first book and continues here, with minor but casual use of ableist slurs and an unfortunate speculative focus on the role insanity might have played in the actions of the eventually revealed killer. The motives and character background are really strong up until that ending, so it wasn’t enough to detract from the satisfying feeling of clues coming together, but saying “and also they weren’t mentally stable” mixed in with the rest of the reveal dampened it slightly for me. Either it’s obvious that they weren’t all right because they were killing people, and thus the book didn’t need to say that they’re “crazy”, or they were killing people without mental illness playing a role in their actions and so it’s just not applicable except in the colloquially ableist sense, and would be better not entering the discussion at all. I loved the story and found the characters, new and old, to be very engaging, despite this issue, so I’ll definitely be reading the next one. 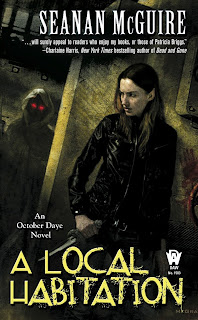