Ninefox Gambit by Yoon Ha Lee (The Machineries of Empire, #1)

The first installment of the trilogy, Ninefox Gambit, centers on disgraced captain Kel Cheris, who must recapture the formidable Fortress of Scattered Needles in order to redeem herself in front of the Hexarchate.

To win an impossible war Captain Kel Cheris must awaken an ancient weapon and a despised traitor general.

Captain Kel Cheris of the hexarchate is disgraced for using unconventional methods in a battle against heretics. Kel Command gives her the opportunity to redeem herself by retaking the Fortress of Scattered Needles, a star fortress that has recently been captured by heretics. Cheris’s career isn’t the only thing at stake. If the fortress falls, the hexarchate itself might be next.

Cheris’s best hope is to ally with the undead tactician Shuos Jedao. The good news is that Jedao has never lost a battle, and he may be the only one who can figure out how to successfully besiege the fortress.

The bad news is that Jedao went mad in his first life and massacred two armies, one of them his own. As the siege wears on, Cheris must decide how far she can trust Jedao–because she might be his next victim.

The worldbuilding in NINEFOX GAMBIT is deep and immersive and very detailed in a way that sometimes was a little overwhelming, but the dynamic between the MC and her shadowy guide help to make sure that the importance of something was explained even if the details or dizzying and arcane and fantastic, the characters weren’t worried about making sure I would know what was going on, but the structure of the book itself and the setup for the main characters combined to make sure that even if I didn’t know what a word or detail meant in this world, I knew why it mattered. “Hard sci-fi“ is a phrase that almost feels appropriate here, but is wholly inadequate to summarize the way the little details makes this book shine. It’s hard sci-fi from a different universe, with all the precision and technical jargon from a world where the way someone stands in a formation aligns with their calendar to create devastating beauty and destruction in a battle, where manipulating holy days can change everything.

My favorite thing in this book is I now get to add “calendrical rot” to my vocabulary, I don’t know how I will use it after this but I’m very glad to have it now. My second favorite thing is the way that behavioral manipulation and mind games are shown in such a subtle and empathetic way. I was so immersed in the MC‘s perspective that while I trusted her as a narrator, my understanding of what was going on was very tied to how much she did or did not figure out about what her shadowy companion was doing, since we never get his perspective. Their conversations are fascinating, the way they jointly and separately have to navigate the MC’s ability to have conversations with other people led to some great moments, and it meant that wow there were times that had pretty straightforward delivery of a lot of information, they only technically fell in the category of info dump because they were things that naturally needed to be explained. Even the little moments where the companion comments on the way something has changed was used artfully so that the reader could care more about what it Is even though the MC needed to learn what it Was.

I’m a big fan of interstitial chapters and the ones here are fantastic examples of world-building and subtle character development. They’re funny and add up to be very informative but the story will still make sense if you don’t pay attention to them. They’re a window into a perspective that’s very different from the MC, and this is used in a combination of explicit and implicit world-building to show literally what someone says about their actions and to demonstrate other ways of thinking about events shown in the main chapters. 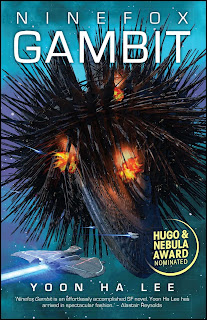