A triumphant, genre-bending breakout novel from one of the boldest new voices in contemporary fiction

Vern--seven months pregnant and desperate to escape the strict religious compound where she was raised--flees for the shelter of the woods. There, she gives birth to twins, and plans to raise them far from the influence of the outside world.

But even in the forest, Vern is a hunted woman. Forced to fight back against the community that refuses to let her go, she unleashes incredible brutality far beyond what a person should be capable of, her body wracked by inexplicable and uncanny changes.

To understand her metamorphosis and to protect her small family, Vern has to face the past, and more troublingly, the future--outside the woods. Finding the truth will mean uncovering the secrets of the compound she fled but also the violent history in America that produced it.

Rivers Solomon's Sorrowland is a genre-bending work of Gothic fiction. Here, monsters aren't just individuals, but entire nations. It is a searing, seminal book that marks the arrival of a bold, unignorable voice in American fiction.

Haunting and visceral, SORROWLAND is the story of a Black intersex teenage mother and her children after leaving a religious compound for the woods. It has a subtle kind of intensity where each passage is bearable, but any literal description of the plot tends toward a catalog of horrors.

This book has such a beautiful way with language. The words weave and roll; mesmerizing whether describing turning a deer’s sinew into bowstring, the ever-changing wonder of Vern’s children growing up, or the strange and monstrous changes taking over her body. Since it is a horror story about a mother, I’ll clarify that her relationship with her children is not a source of horror. The way the children are described is full of love, exasperation, and endearment, usually in equal parts, wrapped in the tension between protectiveness and fostering their growing autonomy. It’s about a person fostering their own sense of agency as they care for someone else, as they have people to protect.

The worldbuilding inhabits a strange space where many relevant facets of US history are alluded to or perhaps even briefly described, but because one character or another is hearing of them for the first time, the narrative gives space and understanding to pull the reader in if they are similarly unfamiliar. In many ways the true horror is how little of the book requires the speculative elements in order to be terrifying, for often the mundane details are the most grotesque.

TW for mention of AIDS (brief). 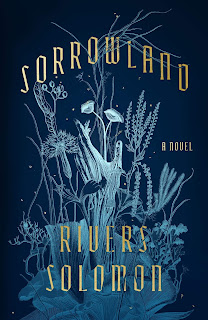