The Dream Thieves by Maggie Stiefvater (The Raven Cycle, #2)

One secret: Ronan can bring things out of his dreams.

And sometimes he's not the only one who wants those things.

Ronan is one of the raven boys - a group of friends, practically brothers, searching for a dead king named Glendower, who they think is hidden somewhere in the hills by their elite private school, Aglionby Academy. The path to Glendower has long lived as an undercurrent beneath town. But now, like Ronan's secrets, it is beginning to rise to the surface - changing everything in its wake.

THE DREAM THIEVES delves into Ronan's nightmares as the raven boys (and Blue) adjust to the changes in Cabeswater after their previous adventures. Secrets can kill. Some already have.

The characters are broken and messy, trying to help each other in their various pursuits but not always getting it right. I like the shift in focus from the first book. I especially like getting a lot more of Ronan, in a lot of important ways this is his book just like THE RAVEN BOYS was Gansey’s book.

One thing this series does very well and this book continues is portraying antagonists in a way that makes them at the very least understandable, if not outright sympathetic. I came away with a much more nuanced dislike of a particular villain, and I’m really liking a different one who thus far seems to be pulling off a heel-face turn.

The world-building is a bit lopsided, it's very focused on the characters and the way that the magic affects them but it leaves even more unexplained. It makes up for it by delving into their inner lives in a very intimate way, exploring the nuances of them as people both individually and with each other. It takes seriously the idea that people are a bit different around various combinations of other people, and uses that to heighten and dissipate tension throughout the story. The Raven Boys are the Raven Boys, Blue is Blue, while everything and everyone else matter only as much as they intersects with their lives. No more, and no less. It has a feeling of extreme focus, like nothing else in the world matters to them and their story, with all its complications and obsessions, is all there is.

This wraps up a very major thing left hanging from the first book. Its main storyline was teased earlier but a secondary plot begins here and wasn't present previously. Several major things are introduced and resolved in this book. It left some things hanging to be resolved later. There's a mix of returning and new narrators, and their voices are very distinct from each other and from different narrators in the first book. Some of the plot would make sense without having read the first book, but as a whole this definitely needs the first book and couldn't stand alone if someone read it at random.

I have a couple quibbles related to characterization, but given that the overall arc of this series is that people start out mixed up and confused and bumping against each other‘s hurt edges and then gradually try to get better, it makes it hard to know whether a couple of my sticking points are on purpose or if they are artifacts of unintentional bigotry. Something that was briefly in THE RAVEN BOYS but returns here is the idea that a particular character is beautiful... except for her large nose. Since the book does go out of its way to make a point of addressing stereotypes that lie adjacent to this one and calling them out as harmful, I don’t know what to think about this moment, but it made me uneasy.

Overall I loved this as a continuation of the series but it's definitely a middle-of-the-series book (and it shows). The plot manages to be almost self-contained in its scope but utterly reliant on the first book for its foundation and backstory to sustain its emotional core. The growth and change that happens here is so wonderful because the first book had something else, something harsher, ill-fitting, and tense running through it. The release of that tension and exploration of the characters is fantastic because of how they were before, while also being utterly consistent with them as people. It's progression rather than revision, and done wonderfully. 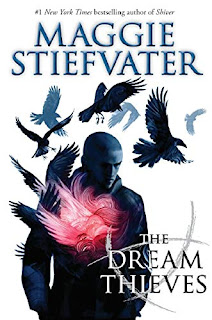