With the defeat of the evil Douglas behind him, Sam LaCroix is getting used to his new life. Okay, so he hadn't exactly planned on being a powerful necromancer with a seat on the local magical council and a capricious werewolf sort-of-girlfriend, but things are going fine, right?

Well . . . not really. He's pretty tired of getting beat up by everyone and their mother, for one thing, and he can't help but feel that his new house hates him. His best friend is a werebear, someone is threatening his sister, and while Sam realizes that he himself has a lot of power at his fingertips, he's not exactly sure how to use it. Which, he has to admit, is a bit disconcerting.

But when everything starts falling apart, he decides it's time to step up and take control. His attempts to do so just bring up more questions, though, the most important of which is more than a little alarming: Is Douglas really dead?

Getting the point of view for both the protagonist and antagonist was cool at first, but now it feels like I’m waiting for the protagonist to figure out a mystery where the antagonist handed me the answer a hundred pages ago. It’s a particular kind of tension which I just don’t like, and which makes me too anxious to keep reading. I think what happened is that while both HOLD ME CLOSER, NECROMANCER and NECROMANCING THE STONE are horror, the first felt enough like a creature-feature for me to like it, while this one is designed to convey the slow creeping dread of a great horror movie where the audience put it together already and they watch, helplessly, as the protagonist(s) fumble because they just don’t know what’s causing everything. It does it well, it’s doing very well a thing I can’t stand, so I’m stopping. 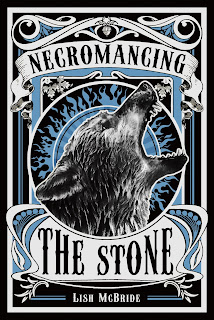 Labels: DNF YA: Fantasy YA: Horror