The Ballad of Black Tom by Victor LaValle

People move to New York looking for magic and nothing will convince them it isn't there.

Charles Thomas Tester hustles to put food on the table, keep the roof over his father's head, from Harlem to Flushing Meadows to Red Hook. He knows what magic a suit can cast, the invisibility a guitar case can provide, and the curse written on his skin that attracts the eye of wealthy white folks and their cops. But when he delivers an occult tome to a reclusive sorceress in the heart of Queens, Tom opens a door to a deeper realm of magic, and earns the attention of things best left sleeping.

A storm that might swallow the world is building in Brooklyn. Will Black Tom live to see it break?

THE BALLAD OF BLACK TOM is a Lovecraftian retelling which transforms the original story from a litany of racism to a story of a 1920's Brooklyn Black man's existence in that racist miasma, and bloody revenge after a murder by the police.

The world-building dances a delicate line of conveying the racism of the 1920's while using only as much explicit racism as is needed to show the attitudes of the various characters. There's a scene which is all the more stark and impactful for using phrases still wielded today against Black people who have been murdered by police. I don't know if those exact phrases are anachronist or not, but if they are then the "authentic" 1920's version would involve a lot more slurs, and I have no quibbles with the author's choice of language here.

I love the first half where Tom is narrator, and at the end when he reprises the role. It's evocative and emotionally powerful, and to me it's the heart of the story. The section with the detective was good, I didn't like it as much because I don't like the detective, but it's really well written, and it shows how racism and xenophobia skews his impression of what's happening around him.

This is amazing on its own and I wish I'd just left it there. In order to review this in its full context as a retelling of THE HORROR AT RED HOOK by H.P. Lovecraft I read the source material. That was a terrible decision, I have regrets, it's so bad that it doesn't get a separate review, it's just bad. Almost all of the text is a litany of racial slurs and xenophobia with the barest thread of a plot. THE BALLAD OF BLACK TOM is amazing and deserves to stand on its own, just forget about the original. 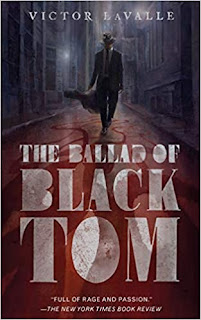