The Wolf of Oren-Yaro by K.S. Villoso (Chronicles of the Bitch Queen, #1)

"They called me the Bitch Queen, the she-wolf, because I murdered a man and exiled my king the night before they crowned me."

Born under the crumbling towers of her kingdom, Queen Talyien was the shining jewel and legacy of the bloody War of the Wolves. It nearly tore her nation apart. But her arranged marriage to the son of a rival clan heralds peace.

However, he suddenly disappears before their reign can begin, and the kingdom is fractured beyond repair.

Years later, he sends a mysterious invitation to meet. Talyien journeys across the sea in hopes of reconciling their past. An assassination attempt quickly dashes those dreams. Stranded in a land she doesn't know, with no idea whom she can trust, Talyien will have to embrace her namesake.

A Wolf of Oren-yaro is not tamed.

THE WOLF OF OREN-YARO begins with a queen journeying to meet her estranged husband, then abruptly transforms into a flight from assassins and a struggle just to survive in a strange land where her name means nothing.

The world-building is excellent, with just the right combination of novelty and repetition to introduce and then reinforce ideas and details throughout the story without any one section feeling like infodumping. The convoluted machinations involved appeared at first to be simple, then were gradually questioned and complicated until the final reveal makes things suddenly make sense in a really cool way. While the politics matter, the heart of the story is how Talyien interacts with the ordinary people that she's around for the first time in her life, and what choices she makes under each new and trying circumstance. My favorite individual scenes were the scams, because I love heists, and my favorite secondary character is Khine. I love the way that he and Talyien build this friendship without feeling like the narrative is pushing them together romantically. He has his own baggage, she's literally trying to track down and possibly reconcile with her husband, and they just work really well as characters whenever they're in scenes together. It's either genuinely a platonic friendship or the slowest of slow burn romances, and either way it bodes well for the rest of the trilogy. As for Talyien herself, she's a fantastic narrator. While I was firmly on team "Rayyel isn't worth it" from the start of the book, I understand why she makes the choices she does even if they're definitely not the ones I would make.

I'm definitely interested in seeing where the rest of this series goes. It was a stressful read in places due to imminent danger to characters I like, and very good overall. 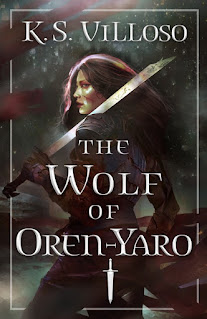