Just when Sarah Zellaby, adopted Price cousin and telepathic ambush predator, thought that things couldn't get worse, she's had to go and prove herself wrong. After being kidnapped and manipulated by her birth family, she has undergone a transformation called an instar, reaching back to her Apocritic origins to metamorphize. While externally the same, she is internally much more powerful, and much more difficult to control.

Even by herself. After years of denial, the fact that she will always be a cuckoo has become impossible to deny.

Now stranded in another dimension with a handful of allies who seem to have no idea who she is--including her cousin Annie and her maybe-boyfriend Artie, both of whom have forgotten their relationship--and a bunch of cuckoos with good reason to want her dead, Sarah must figure out not only how to contend with her situation, but with the new realities of her future. What is she now? Who is she now? Is that person someone she can live with?

And when all is said and done, will she be able to get the people she loves, whether or not they've forgotten her, safely home?

*CALCULATED RISKS contains the novella SINGING THE COMIC-CON BLUES, which comprises the final sixty or so pages of the book as published.

CALCULATED RISKS was a dream book for me, with a new dimension, giant arthropods, and cuckoos as zombies. The way it balances introspection, ethical ponderings, and tense action is fantastic. I knew I'd like it because I've liked everything I've read so far by Seanan, but now I want my own giant spider to ride. I love most of the stuff which was probably supposed to feel a bit like horror because I'm very excited by the prospect of spiders the size of horses, tame mantids big enough to to use as steeds, and excellent use of "our zombies are different". The very large arthropod-like creatures have a consistent presence in the book and I had the best time reading all of it. The bipedal characters are great too! Sarah is an excellent narrator, I'm warming to Mark, and it was interesting to see a different side of Annie and Artie after experiencing each of them as narrators (plus, uh, the memory thing). The changes felt like they fit the level of mental adjustment made to the characters. I really like stories where a character becomes different because of changes to what they remember (or how they think about what they remember), and this was really great all around.

This wraps up an extremely major thing left hanging from the previous book. The entire point of this one is to figure out how to undo or at least mitigate what happened in the cliffhanger from IMAGINARY NUMBERS. There's a very major thing which is introduced and resolved in this book, and a really cool storyline which was introduced here and wasn't present previously (Greg is the best!). It leaves a bunch for future sequels to pick up, and I'm very excited for what might happen next from the interpersonal changes made here. The main character (Sarah) was one of the narrators from IMAGINARY NUMBERS and her voice here is consistent with her previous appearance. This would not make sense if someone started with CALCULATED RISKS and didn't already know about the series. It feels a bit like IMAGINARY NUMBERS so fundamentally changed what the characters thought they knew about Johrlacs that if someone tried to jump in any later than MAGIC FOR NOTHING (the first book where Antimony narrates) they wouldn't get what's happening (or if they do get what's happening in a literal sense, it wouldn't have the emotional weight and context from the previous books).

Some stuff in how the magic works reminded me of MIDDLEGAME (same author, different series), but they're very different stories and it was nice to know that there's more room for "math as magic" since it's a really great idea done well here (and done differently than MIDDLEGAME, for all that they both involve writing large equations while trying not to die).

I love this and need to know what happens to REDACTED in the next one. By "REDACTED" I mean a specific character and also secretly all of the characters, as I am already excited by the prospect of the sequel. 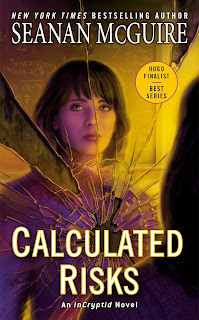