The Raven Boys by Maggie Stiefvater (The Raven Cycle, #1)

Every year, Blue Sargent stands next to her clairvoyant mother as the soon-to-be dead walk past. Blue never sees them--until this year, when a boy emerges from the dark and speaks to her.

His name is Gansey, a rich student at Aglionby, the local private school. Blue has a policy of staying away from Aglionby boys. Known as Raven Boys, they can only mean trouble.

But Blue is drawn to Gansey, in a way she can't entirely explain. He is on a quest that has encompassed three other Raven Boys: Adam, the scholarship student who resents the privilege around him; Ronan, the fierce soul whose emotions range from anger to despair; and Noah, the taciturn watcher who notices many things but says very little.

For as long as she can remember, Blue has been warned that she will cause her true love to die. She doesn't believe in true love, and never thought this would be a problem. But as her life becomes caught up in the strange and sinister world of the Raven Boys, she's not so sure anymore.

THE RAVEN BOYS is a found family story of intense friendships, supporting each other's obsessions, and navigating the uneasy balance of helping someone but not doing the thing for them.

I was a little nervous when the start of the book seemed headed towards "girl torn between two boys and whoever she chooses will die". Maybe in the end the series will have that technically happen, I don't know yet, but in the meantime this is a complex and earnest story of five kids on the cusp of adulthood just trying to be good friends to each other even though disparities in privilege and circumstance stain their most heartfelt interactions. This is made more complicated when (because of clairvoyant stuff) the girl knows that one of the boys will die within the year. All five of them have their own unique tangle of issues and baggage and they don't say the right thing all the time but they're just trying to get it right (some of them act like they want to crash and burn and seem to be trying to get it wrong). Blue fits in among the Raven Boys without being overshadowed, I love her relationship with her family (especially in contrast to the way the boys are so disconnected from each of theirs). Gansey has all the money he could want but he can't just solve his friends' problems for them and it's tearing him up inside. Adam is determined not to be beholden to a rescuer, but needs a way out. Noah tries to keep the peace (or at least get out of the way). Ronan is great to have on one's side in a fight but oscillates between seeming apathy and violence in the face of an uncertain future.

The world-building is pretty decent on the magic front but definitely assumes that you know things like what a boys school is. The characters are very well developed but the world a step away from them is sparsely sketched at best, and it's a very character-driven story. I liked how focused it felt, and it was nice to have a story about teens who attend school that wasn't desperate for me to know what happened in each one of their classes, or exactly what Adam does at his job after school. It's a particular vibe and I enjoyed how it worked out here. When it does focus in on a location it paints it in vibrant detail, I'm thinking particularly of the grove. Each space is described based on how it feels to be there and secondarily on how it appears, which suited the increasingly magical bent of the story.

I'm definitely going to read the next book, I need to see what happens next for them. 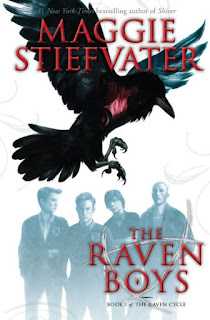