Ever since she can remember, Briseis has had power over plants. Flowers bloom in her footsteps and leaves turn to face her as though she were the sun. It's a power she and her adoptive mothers have spent her whole life trying to hide. And then Briseis inherits an old house from her birth mother and suddenly finds herself with the space and privacy to test her powers for the first time.

But as Briseis starts to bring the house's rambling garden back to life, she finds she has also inherited generations of secrets. A hidden altar to a dark goddess, a lineage of witches stretching back to ancient times, and a hidden garden overgrown with the most deadly poisonous plants on earth. And Briseis's long-departed ancestors aren't going to let her rest until she accepts her place as the keeper of the terrible power that lies at the heart of the Poison Garden.

Cinderella Is Dead author Kalynn Bayron brings a Black Lives Matter message and LGBTQ+ themes to this empowering fantasy about a young woman finding the strength to challenge everything she has been told is true.

THIS POISON HEART is about a Black girl coming into her own in a place made for her, and taking on the strange power and responsibility of her birth family's history in the process.

I like the world building and backstory in terms of place and history, but where this really thrives is in its characters. Bri's relationship with her moms is complex and nuanced, conveying years of personal history between the three of them without crowding the page with in-jokes.  Her lapsed friendships have enough detail to feel like they matter to her, and maybe mattered a great deal more previously, but they don’t take up too much space with characters who will barely appear in this story. The cast of named townspeople is numerous enough to feel full, but it’s a manageable number of characters (something that felt especially important as the various lies and half-truths start to become evident). Bri herself is glorious, thriving in a strange and unexpected place. The focus is on her as she explores the house and town, starting to make a space for herself where she isn’t constantly hiding.

Given that this is the first book in the series, I think the pacing is great. For the first 75% of the book the felt like it could maybe be standalone in the sense that plot flows really well, I understood why characters were where they were and were doing what they were doing, and the bits that I didn’t understand were obviously part of the mystery at the core of the story. There’s a reveal that happens late in the book that turns the first part of it from good to brilliant. It takes choices by various characters which seemed to Bri to be illogical or contrived in some way and gives them a new weight and context. The text handles that transformation smoothly, making the whole book better without invalidating the first impression.

I liked this and I'm excited to see where the rest of the series goes! 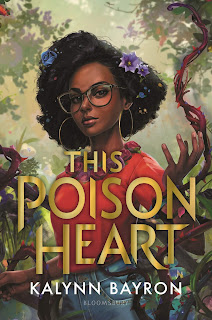