All Chris really wants is to be a normal kid, to hang out with his friends, avoid his parents, and get a date with Rebecca Schwartz. Unfortunately, Chris appears to be turning into a vampire. So while his hometown performs an ancient ritual that keeps Tch'muchgar, the Vampire Lord, locked in another world, Chris desperately tries to save himself from his own vampiric fate. A savagely funny tale of terror, teen angst, suspense, and satire from National Book Award winner M. T. Anderson.

In THIRSTY by M.T. Anderson everyone sucks. Suddenly learning you're a vampire doomed to brief madness before death or (best case scenario) a long life of cannibalism will ruin anyone's day. Looks like it's going to ruin Chris's month.

The thing about THIRSTY is that there are no heroes and no one is actually meant to be likeable. The protagonist is very sympathetic because of his situation, but he's not good. He wants to be, but he's a kid turning into a vampire and (in this world) that means he's doomed to either kill humans or literally go insane as his body turns against him. I hesitate to describe him as a monster (even though he's described as such throughout the text) because of the way the book plays with the idea of monstrosity. Every time Chris tries to figure out what to do and how to exist he's confronted with a way that this too, is monstrous. No one's hands are clean. The entanglement of systems surrounding the existence of vampires in Chris's town is implied to be just one of a multitude of terrible systems around dealing with the reality of the supernatural while trying to make their existence as easy to ignore as possible for human citizens. As a kid I was haunted by the food served at the vampire party and the ending lines of the book. As an adult, the scene where Chris and his mom discuss changelings, to me, perfectly encapsulates the book. It assumes that an unnamed character should simultaneously have done what she did to one of her twin children who was a changeling, while also punishing her for doing the same thing to the other twin who was actually human. She's treated as monstrous for harming her human child but praised for harming her changeling child. It's a stunning moment of cognitive dissonance for Chris's mother who sees one action as praise-worthy and a nearly identical action performed in the same moment as terrible, based on information it was impossible to have beforehand.

Adding into the theme of "everyone's a monster", many of the content warnings I listed for this are from the human characters being very terrible to each other. Chris engages in bullying one of his best friends by calling him "Jerk" when that's not his name. There's this sense that Chris was part of the bullying because he thought it was normal, and when his world is shaken and he stops being the person he thought was, only then does he start questioning things like why he would insult one of his only friends every time they speak. This doesn't make him suddenly better to his friend (remember, everyone sucks in this book), but he's questioning his actions for the first time. The teenage characters are casually ableist, misogynistic, and actively bully each other. The book itself doesn't seem to condemn these attitudes and at times clearly is against them, and it felt managed to show that they're kind of terrible people, but without inundating the reader with their casual bigotry.

I loved this as a teen and I'm glad it holds up so well (as long as you know that everyone is terrible and don't think that the author is endorsing any of the bigotry depicted, because they're clearly not). It's funny but it's definitely not lighthearted. It reminds me of Cirque du Freak by Darren Shan, if you liked that series you'll probably like this. 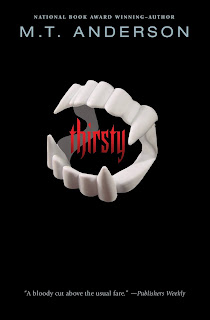