She can't be alone, because a boy from another world experiences all that alongside her, looking through her eyes.

Nolan longs for a life uninterrupted. Every time he blinks, he's yanked from his Arizona town into Amara's mind, a world away, which makes even simple things like hobbies and homework impossible. He's spent years as a powerless observer of Amara's life. Amara has no idea . . . until he learns to control her, and they communicate for the first time. Amara is terrified. Then, she's furious.

All Amara and Nolan want is to be free of each other. But Nolan's breakthrough has dangerous consequences. Now, they'll have to work together to survive--and discover the truth about their connection.

OTHERBOUND is a story of class, consent, disability, torture, and power, as told by two kids whose minds and worlds are entwined. Nolan never meant to watch Amara's life, but now they must work together if they both want to be safe.

The world-building is excellent though it was a bit confusing at first because it involves characters lying about what's happening (and sometimes just being wrong about how things work). This means the early explanations don't quite fit what's going on and made it a little harder to initially understand the nuances.  That aside, what's there is complex and internally consistent in a way that feels brilliant. It has so many little details I want to gush over (but also don't want to spoil). Given that the other world has nothing to do with Earth, there are linguistic differences, time differences, and some good technological world-building. I love how it's all put together. The characters are great, I like the way the text makes it clear that all Amara's (and also Maart's) external dialogue is signed but it doesn't treat them as secondary when their conversation partners are vocalizing. I'm impressed by how class and disability are interwoven, and how a bunch of little worldbuilding things are informed by that intersection. Everything from the way Servants are marked by being rendered mute to Nolan's casual discussion of his prosthetic leg and management of seizure medication. I will note that he doesn't actually have seizures, his mental travel to wherever Amara is looks like seizures to anyone back on Earth, so he's managing both the actual effects of losing muscular control when he closes his eyes and the mental/emotional drain of knowing that everyone else's understanding of the problem is missing crucial information.

There's a power-imbalance romance which has a lot of discussions about the inherent inequality in any potential relationship, so much so that it's actually mostly discussions about power and very little on-page romance. I would have been very uncomfortable if that balance had been flipped, and I'm glad that the book addresses (and then characters make choices after discussing) the inherent inability to consent under such a massive power imbalance. It was self-aware in a way that I appreciate and wish happened more. Power differentials can be sexy if done right, but anything where one party can literally have the other tortured or killed with a word is too large of a gap for consent. The theme of consent goes beyond the potential romance, Nolan's invasion of Amara's body and their relative abilities (or, more frequently, inability) to consent to this entanglement is a major point in the story. Review the content warnings for more detail, but please be aware that the treatment of consent and negotiation of boundaries over the course of the book involves a whole lot of consent not being respected, including but not limited to graphic scenes of torture.

I loved this and I especially liked the ending. This was a new (to me, at least) way of telling a story of entangled/parallel worlds and I'm so glad I read it. 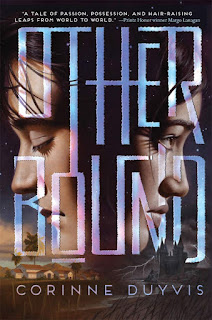