Shadow demons plague the city reservoir, and Red King Consolidated has sent in Caleb Altemoc — casual gambler and professional risk manager — to cleanse the water for the sixteen million people of Dresediel Lex. At the scene of the crime, Caleb finds an alluring and clever cliff runner, crazy Mal, who easily outpaces him.

But Caleb has more than the demon infestation, Mal, or job security to worry about when he discovers that his father — the last priest of the old gods and leader of the True Quechal terrorists — has broken into his home and is wanted in connection to the attacks on the water supply.

From the beginning, Caleb and Mal are bound by lust, Craft, and chance, as both play a dangerous game where gods and people are pawns. They sleep on water, they dance in fire... and all the while the Twin Serpents slumbering beneath the earth are stirring, and they are hungry.

*The first five books of this series were written and published out of in-universe chronological order. The comments in this review are based on reading the series in publishing order, where TWO SERPENTS RISE is read after THREE PARTS DEAD. At some future date I might do a chronological order read-through and redo the sequel checks accordingly.*

TWO SERPENTS RISE does with corporate espionage thrillers what THREE PARTS DEAD did with murder mysteries. That is, it takes their tropes and drops them in a world of gods, magic, and contracts where personal grudges and mundane discontent threaten to upend everything that literally hundreds of people have spent their lives working towards.

One place this excels is in taking seriously the idea that the systems in its world are flawed and that it's important to try and fix them. Caleb cares sincerely about making things better, even if he doesn't start out with a clear idea that change is needed immediately or what could be done to fix things. It has the feeling and the actuality of complex negotiations balancing competing needs, all while Caleb works to figure out what good he wants to maximize in the system.

Caleb and Mal's relationship was strange for me. It has a kind of thrill-seeking at the heart of it that I can't personally identify with, though it definitely works for them as characters. I like Caleb's friendship with Teo, and his relationship with his dad was plot-relevant in ways that I definitely didn't expect at the start.

I like the world-building but so much ground was laid in THREE PARTS DEAD that some of what I liked might actually have been originally shown there. That also meant that at times it feels like it has both too much and too little information. This builds on a lot of ideas established in the first book, and it discusses them in a way that expands on previous knowledge but also assumes that the reader is at least passingly familiar with the major concepts. It doesn't explain what the gods are or why they're connected to the people and controlled by contracts... but it goes deep into what those gods mean to different people, and why there are so many factions who all think they're right.

This doesn't wrap up anything from the first book, and the entire storyline starts here and wasn't present before. It's absolutely its own story with many major things introduced and resolved here. It does leave something for later sequels to pick up but the thing it leaves open is so big that I suspect it's a series arc thing rather than something that would be immediately continued in the next book. The main characters are all different from in THREE PARTS DEAD, and each of them feels distinct from one another. TWO SERPENTS RISE doesn't intersect with the first book at all in terms of plot, however it's essential to read THREE PARTS DEAD first because that book was a very detailed crash course on Craft, Gods, and Contracts, which are three essential concepts in this book as well. Someone could muddle through and understand why different things matter if they tried starting here, but THREE PARTS DEAD burned into my brain how Craft, Gods, and Contracts work so thoroughly that I don't even know how this would feel to someone who read it without that grounding.

I like it overall and I'm looking forward to seeing where the rest of the series goes! 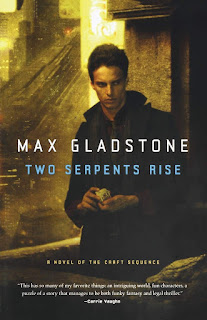