The Weight of the Stars by K. Ancrum

A vivid, evocative YA lesbian romance about how the universe is full of second chances.

Ryann Bird dreams of traveling across the stars. But a career in space isn't an option for a girl who lives in a trailer park on the "wrong" side of town. So Ryann becomes her circumstances and settles for acting out and skipping school to hang out with her delinquent friends.

One day she meets Alexandria: a furious loner who spurns Ryann's offer of friendship. After a horrific accident leaves Alexandria with a broken arm, the girls are brought together despite themselves--and Ryann learns her secret: Alexandria's mother is an astronaut who volunteered for a one-way trip to the edge of the solar system.

Every night without fail, Alexandria waits to catch radio signals from her mother. And now it's up to Ryann to lift her onto the roof day after day until the silence between them grows into friendship, and eventually something more.

The Weight of the Stars is the new LGBT young adult romance from K. Ancrum, written with the same style of short, micro-fiction chapters and immediacy that garnered acclaim for her debut, The Wicker King.

THE WEIGHT OF THE STARS is about connection and desire, a story of love and found family, yearning for the stars while understanding the gravity of the undertaking.

This is set in the same town as THE WICKER KING a little more than two decades later and it was amazing to see Jack and August again, now as adults. If you haven’t read THE WICKER KING, this will completely make sense without it. If you have read it then it’s a very welcome peek into their lives as they’re helpful adults in the periphery of THE WEIGHT OF STARS.

I’m so happy to see Ryann as a female protagonist who is given space and encouragement to pursue her dreams without worrying about how it will affect anyone else. She cares so much about people, then when it’s a choice between being selfish and selfless after years of feeling like selfless is the only right choice she gets to make her choice. The slow-burn romance builds her up and pushes her to be and do what she wants. It would have been so easy for it to hold her back and being one more thing shelving her dreams. It’s a love story about helping each other be better people, first and foremost, and that makes it so powerful to read. I especially like the portrayal of Ryann's brother and his son. I don't think I've read a book with a nonverbal character who was treated as self-sufficient before, let alone one who is himself taking care of another person. The friend group is numerous enough to really feel like a group with complex interrelationships, but the focus is managed carefully so that the cast stays manageable in scale with the story. I love that there's a heist because I love heists, but it's a relatively minor portion of the book and it's more about what happens around it and what the circumstances of the heist prompt in the relationships between the characters than it is about the actual event. Not a heist story, just a story with a small heist-like thing.

K. Ancrum’s work (specifically but not exclusively THE WICKER KING, LEGEND OF THE GOLDEN RAVEN, and THE WEIGHT OF THE STARS) exists in this strange middle space between realistic fiction and sci-fi/fantasy. It’s not, ultimately, a fantasy story in THE WICKER KING, just like THE WEIGHT OF THE STARS isn’t strict science fiction but plausible science future. If certain real-world private companies trying to get into space had made different decisions then the backstory of anguish and separation undergirding this story could be happening now (though I hope it’s not). Alternate-history? Alternate-contemporary? It’s strange and beautiful, reaching and yearning, a slow-burn romance igniting like a rocket into a strange place where kisses matter but are not the point. Where jars of applesauce add up to time in the sky. Kindness coming back and making things a little bit better, the space to not speak but maintain connection. Unabashedly queer where that means LGBTQ+ but also strange, odd, a cluster of found family when "no one likes me" and "I am afraid" is met with "sit with us".

This is for when you want to feel like magic is real and the stars can be felt, for just a little while, but the rest of the world isn’t asked to stop. It won’t and it can’t. But for a time the world is brighter with every turning page. 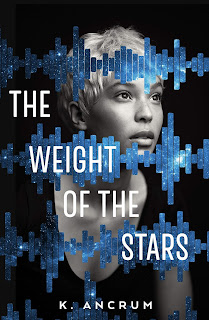