Revenant Gun by Yoon Ha Lee (The Machineries of Empire, #3)

When Shuos Jedao wakes up for the first time, several things go wrong. His few memories tell him that he's a seventeen-year-old cadet--but his body belongs to a man decades older.  Hexarch Nirai Kujen orders Jedao to reconquer the fractured hexarchate on his behalf even though Jedao has no memory of ever being a soldier, let alone a general.  Surely a knack for video games doesn't qualify you to take charge of an army?

Soon Jedao learns the situation is even worse.  The Kel soldiers under his command may be compelled to obey him, but they hate him thanks to a massacre he can't remember committing.  Kujen's friendliness can't hide the fact that he's a tyrant.  And what's worse, Jedao and Kujen are being hunted by an enemy who knows more about Jedao and his crimes than he does himself...

REVENANT GUN is the excellent conclusion to a trilogy about empire, colonialism, complicity, and the difficult but necessary work of dismantling machineries of oppression... in space.

The way this trilogy as a whole portrays trauma, grief, and cycles of violence is really good. The series arc of The Machineries of Empire is a quest to bring down someone who, a long time ago, swore to prevent a particular harm from happening ever again, and in the name of preventing that singular type of grief committed a whole host of atrocities and created systems to enshrine even more. REVENANT GUN is the endgame of that journey, the final pieces for an attempt which seeks to remove that tyrant forever.

This is a compelling story in its own right and a fantastic conclusion to the trilogy. As I'll discuss later this wouldn't make sense to pick up and read on its own, but as a story it is technically self-contained. Most of how it requires the first two books is in the worldbuilding and the setup for how things got to the point where this book's ensemble of narrators make the choices they do. Speaking of that ensemble, I'm so happy to finally get a servitor as a point-of-view character! The ensemble of narrators is really great in this one, the mix of new perspectives felt strategically chosen to allow for "where are they now" updates on past narrators while making sure the new narrators had agency and their own storylines. I tend to like books where some mental change in a protagonist is conveyed though changes in their words and behavior, and this series is full of that. REVENANT GUN provides yet another incarnation of Jedao without having disposed of the last one, and it was really cool to see.

There were some revelations about the way certain things work that make me want to do a re-read of the whole trilogy to see if they show up earlier and I just didn't notice. It's not anything that contradicts the earlier books, just something about the various Moth ships and I'm interested to see if there were clues before the revelation.

There is a major storyline present here which wasn't present previously, but that storyline is so contingent on the prior books that it's not enough to let this stand on its own (nor is it trying to be). As the last book of a trilogy, this had a very satisfying ending. The major loose ends are tucked away so that it hits just the right balance of conveying how things wind up for the main characters without having a litany of “where are they now” in the final pages. It’s finished as a series but open in possibility with implications of a future for the characters who survived. Each book has had several POV characters and I'm pretty sure that all the narrators for REVENANT GUN are new. Maybe they were around before, but I don't think any are returning narrators. While many characters show up repeatedly in the trilogy, the shifting ensembles are balanced without repetition in a great way. Their voices are distinct and within this book I didn't have trouble tracking who was narrating and what their piece of the story is, so the ensemble cast worked really well both here and in the trilogy as a whole. While major elements of this story are self contained in that they begin here with new main characters and also resolve here... the reasons that any of them are doing anything are so wrapped up in events from the first two books that I don't think this would make much sense if someone read it at random. It's book three of a trilogy, so that's to be expected, but this definitely doesn't slow down to reexplain what should be standard knowledge of the setting by now. Instead it accomplishes a bunch of cool narrative things by complicating what has been known, or featuring characters who are explictly working against what would be expected of them. If read without the mooring of those expectations this would be confusing. My advice, as always, if that if the description intrigues you then you should start with book one (RAVEN STRATAGEM) and go from there. 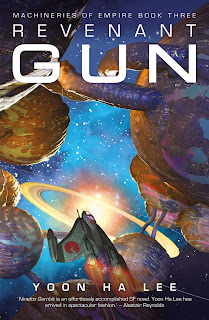