The Disasters by M.K. England

Hotshot pilot Nax Hall has a history of making poor life choices. So it’s not exactly a surprise when he’s kicked out of the elite Ellis Station Academy in less than twenty-four hours.

But Nax’s one-way trip back to Earth is cut short when a terrorist group attacks the Academy. Nax and three other washouts escape—barely—but they’re also the sole witnesses to the biggest crime in the history of space colonization. And the perfect scapegoats.

On the run and framed for atrocities they didn’t commit, Nax and his fellow failures execute a dangerous heist to spread the truth about what happened at the Academy.

They may not be “Academy material,” and they may not get along, but they’re the only ones left to step up and fight.

THE DISASTERS by M.K. England is a heist story with frustratingly persistent copaganda and unexamined colonialism, with a ragtag ensemble who carry off the heist so smoothly that it leaves the story without satisfying tension.

I have two levels of complaints about this book: first there’s the couple of big things which completely tanked my enjoyment of it, and there’s the stuff that exasperated my dislike once I was already irritated but I might have otherwise just mildly disliked as stylistic choices I disagree with. The big things that broke my immersion and were complete deal-breakers: copaganda from the protagonists in a fugitive/heist book, and a starkly pro-colonization story with anti-colonialists as the villains without exploring what that actually means. The things that made me more irritated but I might have otherwise excused were the lack of on-page relationship and emotional development with the characters, stylistic quibbles over what a heist story needs, and the way that all their actual obstacles were solved by talking to authority figures rather than being sneaky or cool. The rest of this review will contain mild spoilers.

The thing that initially broke my immersion an jolted me out of the book was when the protagonist first talks about how his mother is a cop back on Earth. The inclusion of an off-screen sympathetic cop character who is repeatedly brought up during the frameup/heist story... that is a choice that, to me, undermines the book. The most egregious instance of this was when his thoughts about how doing the right thing doesn't always go well uses his ammi's frustration when guilty criminals go free as example of life's unfairness.

I shrug but my heart pangs with sympathy for Case. I get whey she did it. It's hard, accepting that we've done nothing wrong and somehow came out looking like the bad ones. We're raised to believe that if we do all the right things, the law will protect us. Reality is much harsher, apparently. How many times have I heard my ammi come home, frustrated over some case where a guilty criminal went free because of technicalities, or politics, or money? I, of all people, should have known the opposite must be true sometimes too. Can't help but hope, though.

He's on the run, framed for a mass murder he didn't commit, and his way of processing his own situation is to think about guilty criminals who get away and then how his situation is the opposite of that. This attitude becomes especially dissonant and strange when the big reveal of his tension with his brother is that he had the equivalent of a new-driver accident with his brother in the vehicle (except with a spaceship) and was banned from flying so he started breaking into a facility that had flight simulators, eventually he got caught, and his mother (the cop) made the charges go away. On the one hand, it's a consistent lack of self-awareness that makes him feel like a real person. On the other hand, it makes him a terrible protagonist for a heist novel because he's literally on the run and sympathizing with the cops. He convinces one of the characters who's deeply uncomfortable with guns to carry one, and then, when someone in their group gets shot (not by that person) he has an on-page realization that guns can actually hurt people.

Case steps through the door first, her chem gun held awkwardly in front of her. She hadn't wanted to carry a gun at all, but I insisted. Even without any training even without ever having fired one, it's better to have it just in case. It's nonlethal, so what's the worst that happen?

A little while later:

One of us actually got shot. Shooting kills people. Oh my god.

The attitude that someone who is uncomfortable with guns, has never fired one, and has no training should carry one just in case... that makes me deeply uncomfortable and it doesn't seem like anything bad happens from that decision. I'm all for characters making bad decisions and then dealing with the consequences, but the story is weirdly consequence free. I'm not saying I want characters punished. Narrative consequences aren't punishment, narrative consequences are what make the world feel real because when the protagonists push at the world of a story and press at its seams some things are going to push back, and that interplay of boundary breaking, tension, and release is, to me, essential for certain kinds of stories, and a heist story definitely needs it. Breaking boundaries and having interesting things happen because of those cracks is one of the best parts of heist stories.

The second big thing is that it's a story about space colonialization that treats the goodness of colonialization as unquestionable and has anti-colonialists as the villains. The backstory for the anti-colonialists is no deeper than "people were against colonialism from the beginning a hundred years ago and they're still against it except now they're killing people". The colonized planets are terraformed, canonically, and a major thing in the book is that if anyone goes far enough from Earth they can't go back ever because they might have space pathogens that are bad for Earth, so I was expecting some awareness of how their terraforming has changed and devastated the colonial worlds (replacing space plants with Earth plants is not inherently better and I'd argue it's definitely worse), or how Earth bacteria might be bad for the other worlds. Nope, it doesn't touch that at all. It's just taken as read that colonialism is good and so the villains don't need any more complicated motive than being against it.

They're literally on the run from law enforcement for most of the book (I'm not sure whether the cops, military, or some third option are their actual pursuers), and yet everything is framed so that if they just can save the day from the anti-colonialist terrorists then explain things well enough to the authority figures then everything will be fine. I was expecting there to be some twist, something undermining this unquestioning confidence in the goodness of authority figures (IN THE GODDAMN HEIST BOOK) and then... nope. That's how it works out. They save the day for most of the threatened colonial worlds (one planetary genocide does happen, no the story doesn't touch the emotional weight and grief of that devastation at all), explain things to the people in charge, then get to take their stolen spaceship (with newly forged registration) and go be in space together. I was frustrated and underwhelmed.

Now for my minor complaints, the things that increased my irritation but I might not have called out as a big enough deal to stop me from recommending the book on their own. In a ensemble-cast heist story there are three basic ways to get your ensemble.

Where this book stops working for me as a heist story is that no one picked this group and yet they happen to have exactly the skills and connections they need to perfectly pull off the heist. It was such a bizarre confluence of skills that I kept thinking that the big reveal would be that they were chosen as a group because someone wanted them to defeat the anti-colonialists or something. Since they were all rejected by the Academy at the same time it could have been that an insider for the anti-colonialists rejected this group in order to have them specifically in the shuttle together. I don't know what would need to change from there, but it became apparent that they hadn't secretly been picked as an ensemble by anyone, and that made their perfectly-fitting skill sets seem even more unreal. They keep meeting exactly who they need to meet at exactly the right time, nothing actually feels like an obstacle because by the time it's a problem they already have a solution or a destination to get one. They don't know each other and the main personality conflict is that one of them wanted to go to the authorities and try to get their names cleared, so she goes off on her own but gets captured instead. They try to rescue her and run into her on her way out of the building because she'd already effected an escape. They talk a bit about not trusting her because she betrayed them once but it doesn't go anywhere. The main character is bi (love that), and has instant chemistry with two people in the group (seems a bit fast but okay), and then flirts a bunch with one of them (I do like this), but I couldn't get excited about it because the other members of the group aren't explored enough for me to actually have a sense of who they are and what their motivations are. There's a uniformity to them, they're all upset that they were kicked out of the Academy but the biggest difference from there is whether they are or are not upset at being unable to return to Earth. By the end of the book even that is erased as (with no on-page development of this) they're suddenly all at peace with it. They solved most of their problems by either flying fast or talking to authority figures in their own families. Even the mechanic who helps with their ship is dating the protagonist's brother. It contributed to the easy-breezy feeling of everything. I love heist stories because of the interesting kinds of tension they provide, this one had no catch, no snag, only problems they could solve quickly, the biggest delays were transportation time.

A quick rundown of other moments which I didn't like but which also didn't affect the plot:

Seriously they have so many relatives in positions of power that I thought for sure it would be examined or commented on, that it would be making some point, but it's not. It's just there.

Overall, making the falsely-accused fugitives in a heist book be pro-cop is a rot at the heart of the story which poisoned the whole experience for me. When paired with unquestioned colonialism and the other smaller problems I discussed, my reading experience alternated between angry and bored. I don't remember any of the secondary characters well enough to discuss them individually even though I just finished this book, and the romance was simultaneously rushed and empty. 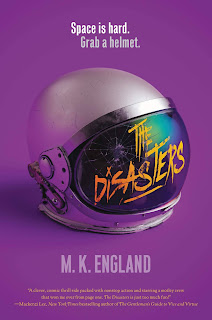