"Twenty minutes to power curfew, and my kill counter's stalled at eight hundred eighty-seven while I've been standing here like an idiot. My health bar is flashing ominously, but I'm down to four heal patches, and I have to be smart."

Two corporations have replaced the US, splitting the country's remaining forty-five states (five have been submerged under the ocean) between them: Stellaxis Innovations and Greenleaf. There are nine supercities within the continental US, and New Liberty City is the only amalgamated city split between the two megacorps, and thus at a perpetual state of civil war as the feeds broadcast the atrocities committed by each side.

Here, Mallory streams Stellaxis's wargame SecOps on BestLife, spending more time jacked in than in the world just to eke out a hardscrabble living from tips. When a chance encounter with one of the game's rare super-soldiers leads to a side job for Mal--looking to link an actual missing girl to one of the SecOps characters. Mal's sudden burst in online fame rivals her deepening fear of what she is uncovering about BestLife's developer, and puts her in the kind of danger she's only experienced through her avatar.

Author Kornher-Stace's adult science fiction debut--Firebreak-- is loaded with ambitious challenges and a city to save.

FIREBREAK is a heart-pounding story of scarcity and danger in a place controlled by warring corporations. Mal is a young streamer trying to impress her viewers enough to make it through each day and avoid ending up in the company dehydration clinics, when .

Because major parts of the plot revolve around resource control and water scarcity, there’s a lot of discussion of water-insecurity and shortage. That was stressful to read but also deepened my immersion in the story. The way Mal’s thoughts did or did not revolve around this essential resource at any given moment matters to the story. The book involves an in-universe MMORPG (multiplayer online game that most people are either playing or watching when they’re not working), and at first I thought that the plot would focus on some objective in the game world, but a little ways in it reveals that the main stakes are bigger and more important than the game, while simultaneously retaining the game’s importance to the story. I loves the shift where technically the game doesn’t matter, but what the game belies means everything.

The world-building is really good, both for the game and the real world. They mutually reinforce each other both in terms of narrative events and the actual structure of life under the Corporation. The idea and reality of resource scarcity is constant, especially early but it never goes away and is very important to the plot.

My favorite character's very description is a spoiler so I can't talk about him much, but I loved the strange rapport between him a Mal, a kind of uneasy peace from someone losing everything and everyone he trusted (which was a short list to begin with).

The ending is emotionally devastating, coming together in a strange blend of bleak and hopeful. It perfectly cements this as the kind of book where I need everyone to read it so they know what it put me through. There's a sense of finality, inevitability, which suffuses the latter part of the story. Watching everything play out and hoping it won't quite end up as bad as it looks. 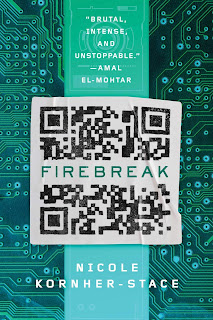