Salamandastron by Brian Jacques is a story of parents and children, legacy, siege, battle, epidemic, and feasting. It’s about passing the torch. A good introduction to Redwall (almost any book will work) but can also stand solo if you just want a good story.

Reading Salamandastron, I love the Redwall books, but now I know a little about the historical and current discrimination against Scots as a language and against the Scottish in the UK, passages with comments of not understanding “Northern” speech of the falcons and eagles are concerning. It’s not subtle, it happens several times that MacPhearsome or Rocangus or Laird Mactalon say something that seems to me (as an American) understandable but very Scottish and then someone declares they didn’t understand the bird at all, but everybeast understands the moles with no trouble. I love the work that went into conveying all the dialects onto the page, it just reads strangely now to have someone keep commenting one how hard it is to understand this particular accent, especially when in the real world it isn’t just an accent, it’s a separate language that has shared roots with English. If we’re lucky enough to have Scottish listeners I’d love some feedback about this issue if you’ve read Brian Jacques’s work.

I like the contrasts between different parent/child pairs in this book. We have Urthstripe and Mara, Ferhago and Klitch, Log-a-log and Nordo, Laird Mactalon and Rocangus, and Loambudd and Urthwyte. All their relationship dynamics are unique and shown pretty well, and it feels like a thematic decision in this particular book.
CW for murder, massacre, plague, death.
Books That Burn podcast episode discussing Salamandastron. 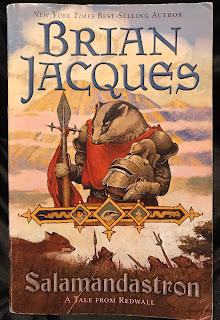