Animorphs Book 12: The Reaction by K. A. Applegate

The Reaction uses the premise of an allergic reaction to build a nice twist on the usual mission formula. Alienation and being unable/unwilling to open up is a major theme, and we see an extreme example of Rachel's drive to solve everything herself.

I like how the books show you that conversations have happened which readers are not privy to. We first learned the term "nothlit" when Ax was narrating, and now Rachel knows it because at some point Ax must have explained. The reader has already learned it, so we don't need some extra scene where Ax passes the info along. When the books are so short, you really need world-building and implied events like that to ride the line between storytelling and info-dumping. Also little things like how when Rachel is relaying what someone else said she uses words that convey the emotion of what they said, rather than just quoting what happened a few pages/hours ago. If the quotative like had been a thing when these books were written, Rachel would use it all the time.

Wow, the creatures Visser Three morphs are amazing. It's not great for the Animorphs when he's involved, but it's a chance to get snippets of other alien life in the series even if the implications are terrible for the creatures in question. 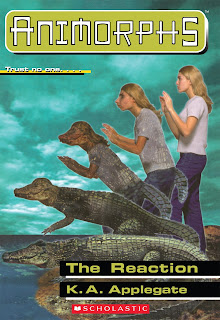