Animorphs Book 16: The Warning by K. A. Applegate

The Warning shows Jake's increasing sense of internalized pressure as a leader. He's in charge and increasingly isolated. When he almost dies in an insect morph the text takes the time to dwell on his fear and helplessness in a pretty brutal way.

There's some fun stuff with 90's computer tech and chat rooms, but this is not a light book. There's a sense of helplessness, and the crushing reality that no matter how many people they can save, someone is still getting hurt.

Cassie is starting to be more of a lieutenant and confidant to Jake in terms of decision making and ethics. She has been the ethical voice of the team for a while, but this book codifies some parts of their dynamic in a way that feel natural. 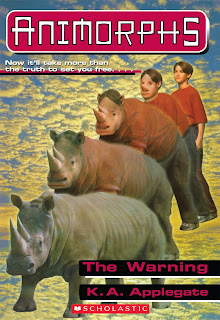