Animorphs Book 13: The Change by K. A. Applegate.

The Animorphs help some aliens in grave danger. Tobias becomes more active in the team, but has to accept some limitations. The balance of frustration and hope was handled well. When the Animorphs make wishes there's someone listening.

It's difficult to stress enough how much this series leans into the sense that these kids are on their own and can't trust anyone else, that not only does no one else know what they're going through, but that if they tried to explain it would put them in danger. But, with that, it also shows the importance of having people you can count on and can talk to. The Animorphs survive because they are a group who has chosen to work together and trust each other.

I'm appreciating how much each of the kids feels like an outsider even though they are a group. That might sound strange, but it helps to convey the feeling that everyone feels left out sometimes, and while they're sometimes right, it's not really possible to have an entire group who are outsiders from that group. Tobias has felt left out and ineffectual, and he gets an opportunity to fix that but it's a bit of a monkey's paw situation. Not quite that bad, but he definitely doesn't get what he would have wished directly for. 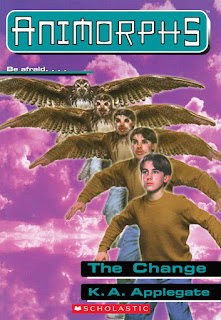