Feed by Mira Grant is a post-apocalyptic book about life/media moving on after the end. Set in 2039 after zombies rose in 2014, it posits a world of dizzying connectedness and loneliness. It’s a political thriller, a monster story, and a wild ride.

Feed’s portrayal of politics and life after the Rising dances on a fine line between world building and info-dumping, and I think it mostly gets it right. The characterization has the right level of attention, given what the narrator would be expected to know. The interstitial passages add insight and depth to the secondary characters, acknowledging a fallible narrator without making her an unreliable one. It sets up preconceptions which are challenged in Feed, shaken in Deadline, and shattered in Blackout. I love these books, I come back to this series about once every two years and it never gets old.
CW for violence, gore, major character death, death.
Bookshop Affiliate Buy Link 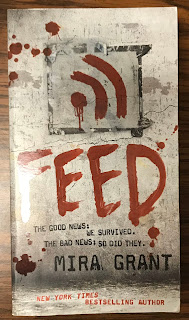