Animorphs Book 11: The Forgotten by K. A. Applegate

The Forgotten puts the Animorphs through the ringer, with existential threats and body horror and also more mundane dangers. The plot mechanic is executed well and the ending is suitably dark. This is one of my favorite books in the whole series.

It is part of a shift that has been slowly forming over the last couple of books where they introduce mechanics that can warp reality above and beyond the basic level indicated by morphing technology. The Ellimist and Chee are other examples that get more play, but I like this one a lot.

It really grapples with the burden of leadership, especially since it's easy to forget that the kids are in middle school (approximately ages 12-15) at this point. Jake's storyline grapples with having responsibility beyond his years because he's the leader of the group, and this book gives him a taste of the emotional weight his decisions could have at any point without delving too deep into it.

If you're trying to get a feel for the series as it gets going but don't want to commit to the whole thing, this is a book you could read by itself to get a taste without spoiling major plot points. 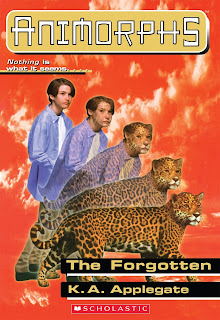