Animorphs Book 17: The Underground by K. A. Applegate

The Underground poses an ethical dilemma related to addiction, and it becomes clear that Cassie's role as the ethical voice is becoming too much. Rachel deals with claustrophobia and Marco laments that none of the great battles involved oatmeal.

Several of the previous books have featured Cassie's role as the voice of morals, reason, and ethics for the Animorphs. In The Underground we start to see that she isn't magically more mature than the rest of them, she's starting to not know what to tell them anymore. They're still kids, probably still in middle school (there hasn't been a direct reference to their level of school in a few books), and nothing is getting easier.

Rachel is the narrator for this one, and this book has a lot of depictions of claustrophobia. I'd have to go back in order to check whether this is a new problem brought on by the events in this book or whether it's been a thread for a while. If it has happened before I think it's been more associated with worrying about not getting out of morph than with being in a small space.

As always, the nightmares are getting worse. Not only are they more frequent, but more of the book is devoted to describing what they are or at least that Rachel is having them. 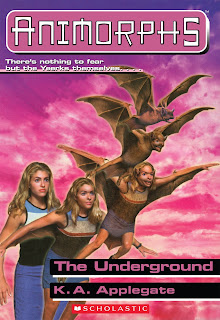