Animorphs Book 1: The Invasion by K. A. Applegate

The Invasion sets up the world of the Animorphs and has a good mix of plot and info-dump. It establishes the expectation that they won't have it easy, that they need to keep secrets, and that morphing isn't just a toy. A good series opener!

For those who are currently unaware:
Animorphs is a series about a group of five friends (and later one more friend, we'll get to him) who find out that the Earth is being invaded by parasitic aliens that could be in anyone but not yet everyone. They must use the power to change into any animal they have "acquired" in order to fight the alien invasion, all while being unable to tell the ones they love that they are in a daily struggle that leaves them emotionally wrecked on a regular basis.

This series deals with anxiety, body horror, death, loss, violence, divorce, death of parent(s), trying to trust when it's inherently unsafe to do so, being child soldiers, war, ptsd, and probably some other things I've forgotten right now but this re-read will refresh my memory. It's a really good series and was formative for a lot of people who spent at least part of their childhood in the 90's or into the early aughts (myself and my co-host included). I'll try to keep these reviews spoiler-free but honestly you should just read this series if you get a chance. 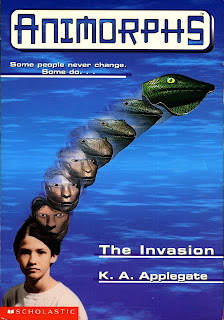