I (Robin) am in the end-stages of a multi-state move. My microphone has been located, but I almost immediately had to travel for work, then I'm traveling again to help a family member.

For the podcast schedule, we might stay monthly through the end of 2022 so we don't get overwhelmed by the upcoming winter holidays and associated family obligations. In that case we plan to resume a fortnightly schedule in 2023.

Last fortnight was heavy on DNFs and this was a bit lighter, but not immune. I tried TOO LIKE THE LIGHTNING by Ada Palmer but couldn't stand the narrator and quit almost immediately. LIGHT FROM UNCOMMON STARS by Ryka Aoki was a blend of too many elements for me, featuring a Faustian bargain already in progress and an intergalactic refugee situation where their new life is well established. There's tension and issues, especially for the character who's a runaway, but I'd prefer to have either way more things mixed in such that the world is obviously very different from our own, or one fewer so that it makes sense that these disparate forces could be present, powerful, and hidden. TL;DR, I dislike it for similar reasons to why Premee Mohamed's writing keeps not being a good fit for me, so if you like her stuff you'll likely enjoy this. It's just not for me.

I read several Hugo-nominated short stories, novelettes, and novellas when preparing for the vote which closes/closed August 11th. Some of those include "That Story Isn't The Story" by John Wiswell, "Colors of the Immortal Palette" by Caroline M. Yoachim, and "L'Espirit de L'Escalier" by Catherynne M. Valente.

Reviews forthcoming for A MAGIC STEEPED IN POISION by Judy I. Lin, SORCERY OF THORNS by Margaret Rogerson, and MAGIC BURNS by Ilona Andrews. With moving and getting ready for work travel it looks like I'm a few reviews short for this cycle, sorry about that. It's at least a little because of how many DNFs I had last fortnight, but I should catch up soon.

THE INTUITIONIST by Colson Whitehead is Mystery/Sci-Fi marketed as Adult. Lila Mae Watson is the first Black female elevator inspector in the department. When she's blamed for an elevator failure, she must navigate a maze of motives flavored with misogynoir. Told in Third Person with Ensemble POVs. Last month I was enthralled with a book which created a dystopia from waiting in line, this had me differently but equally fascinated with a story told around misogynoir and elevators.

A THOUSAND STEPS INTO NIGHT by Traci Chee is Fantasy marketed as Young Adult. Miuko is a young girl in a village which isn't kind to girls and is plagued by demons. After an altercation with a demon on the road, Miuko begins a transformation which might never be undone, whether or not she even wants to go back to how things were before. Told in Third Person with Single POV. I love this and immediately put in on my list to buy when money allows. I read it as an audiobook and enjoyed the narrator.

SHADOWSHAPER by Daniel José Older, book 1 of Shadowshaper is Fantasy, with queer character(s), marketed as Young Adult. Sierra Santiago is a teenager in Brooklyn, planning to make art all summer, when a corpse crashes a party and the murals start weeping. Told in Third Person with Single POV. As someone who only recently set foot in New York State for the first time, it feels like there are a lot of YA contemporary (sometimes fantasy) books set in NYC and in Brooklyn specifically. This fits well in that group which includes Pride by Ibi Zoboi and much of Zoraida Córdova's writing. They have an intensity of place which I can see but can't access, so I'm mentioning it here in case it calls to any of you.

MAGIC BITES by Ilona Andrews, book 1 of Kate Daniels is Urban Fantasy, with queer character(s), marketed as Adult. Kate is a mercenary in Atlanta, where tech and magic alternate in waves, and the People and the Pack are set on a collision course when vampires and shifters start getting killed. Told in First Person with Single POV. Get ready for a bunch of Ilona Andrews (specifically but not only the Kate Daniels books). These were comfort reads for me during much of high school, and I'm pleasantly surprised by how well they've held up (still holding out for one to be five stars).

I've started reading a series I used to read a lot in high school, back when I read a bunch of urban fantasy with vampires, werewolves, or both. I'll try not to overwhelm the blog with them, but I will be reading and reviewing a bunch of Ilona Andrews and Patricia Briggs in the near future.

The Ilona Andrews portion of the reviews are going well, I've scheduled those for Sundays until I run out of them. This means you'll get those at a steady pace and not have the blog overwhelmed because I read 6 of 11 from one series in just over a week.

For 2022 I'm hosting a reading challenge that lasts the whole year. August's prompt is to read something by an indigenous author, with a bonus prompt to read something by queer indigenous author. Our patrons had a tie vote for A SNAKE FALLS TO EARTH and JOHNNY APPLESEED, so I'll read JOHNNY APPLESEED if I'm able to access it (I read A SNAKE FALLS TO EARTH earlier this year).

INTO THE DROWNING DEEP by Mira Grant is set in July through September(?) 2022 so I'm attempting to read it "as it happened". I keep missing the exact days but the general effect is happening and I'm enjoying it.

As of this writing I have one more day to lock in my Hugo 2022 votes, so I'm trying to get through a couple last books so my ballot can be as complete as possible. I'm currently reading A DESOLATION CALLED PEACE by Arkady Martine (love it, very excited), and A MASTER OF DJINN by P. Djèlí Clark (it's okay but I have mixed feelings and don't know if I'll finish it).

I'm still reading the ARC of WHERE YOU LINGER by Bonnie Jo Stufflebeam, which just came out in July. I love some of the stories and have complicated feelings about a few more, so I don't know yet where I'll come out on it.

This time last year I was in the middle of the Murderbot series by Martha Wells. I had just finished the third book, ROGUE PROTOCOL.

Patrons pledging $5 or more each month can vote on some of what I read next. Patrons pledging $50 or more can vote once per month on what we'll cover in the podcast. You can find all of those polls here. Patrons at any level receive the booklist with our planned episodes for up to three months at a time. 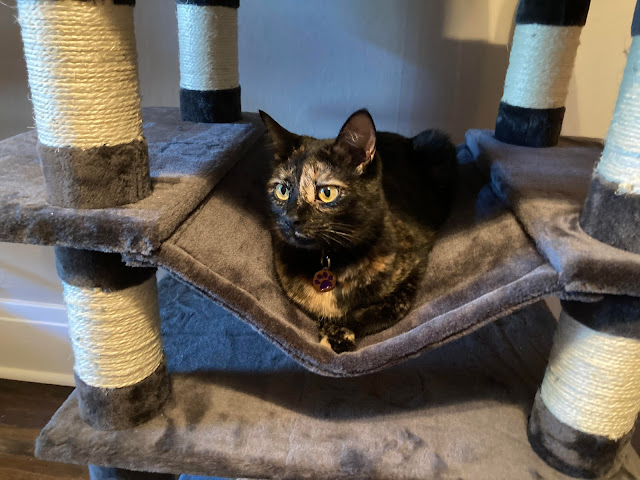