When the magic is up, rogue mages cast their spells and monsters appear, while guns refuse to fire and cars fail to start. But then technology returns, and the magic recedes as unpredictably as it arose, leaving all kinds of paranormal problems in its wake.

Kate Daniels is a down-on-her-luck mercenary who makes her living cleaning up these magical problems. But when Kate's guardian is murdered, her quest for justice draws her into a power struggle between two strong factions within Atlanta's magic circles.

The Masters of the Dead, necromancers who can control vampires, and the Pack, a paramilitary clan of shapechangers, blame each other for a series of bizarre killings--and the death of Kate's guardian may be part of the same mystery. Pressured by both sides to find the killer, Kate realizes she's way out of her league--but she wouldn't have it any other way...

*I read an older edition which doesn't include the prequel story available in later editions.

MAGIC BITES follows Kate Daniels, a mercenary in magic-riddled Atlanta who tries to stay clear of the major powers in the city but tends to be too stabby for that to work all that well.

Kate is a loner by necessity who finds herself getting more entangled than she intended when she investigates her mentor's murder. She has a sword that's excellent at killing undead and needs to be fed if it doesn't get the opportunity often enough.

I wish we had a bit more of her dynamic with Jim, though maybe that's me thinking they were closer than they actually are when this starts out. If the point is that she's kept even her most frequent battle partner at a distance, this conveys that pretty well by treating him as an afterthought except when necessary. Her dynamic with Curran, Jim, and the Pack lays the foundation for many things later on in the series, but, focusing on this book specifically, I like how both she and Curran are so wrapped up in violence as a language that their every interaction is tense and has the possibility of blood, even things that ought to be innocuous.

When starting out a series that seems to be mostly the contemplation of violence, actual violence, and then some romance, it's still a bracing start to kick things off with cannibalism, necrophilia, bestiality, and a murder dungeon. These are balanced with less stressful elements in the narrative, with the most upsetting topics tending to get the barest descriptions, but in combination they make it clear that this city isn't kind to its residents, and Kate will have plenty of things to stab even when this particular murder spree is (hopefully) halted.

MAGIC BITES is a book I've read and re-read for years; it's the start of one of my favorite urban fantasy series, and I enjoy it tremendously. Reading it for this review, I'm impressed with how it holds up for me, but it was never my favorite book in the series. Every time I read it I intensely dislike what happens with Crest. It mostly fits the plot, it enables a truly fantastic related plot beat, but the moment where Kate shows up at his apartment always devastates me because I just wish she'd put other things together earlier. I don't think it breaks the book or anything, it's just a very stressful scene that serves to change who Crest is and can be in the series to make room for someone else.

I love the twist itself, and I appreciate how the groundwork is laid from the very start of the book. The plot works well (even that one scene I don't like has a pretty important purpose), and this sets up a lot for the series to draw upon as it gets going. 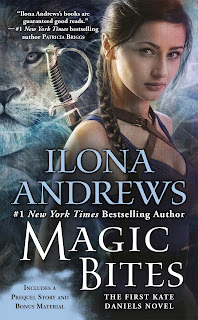