The Intuitionist by Colson Whitehead

It is a time of calamity in a major metropolitan city's Department of Elevator Inspectors, and Lila Mae Watson, the first black female elevator inspector in the history of the department, is at the center of it. There are two warring factions within the department: the Empiricists, who work by the book and dutifully check for striations on the winch cable and such; and the Intuitionists, who are simply able to enter the elevator cab in question, meditate, and intuit any defects.

Lila Mae is an Intuitionist and, it just so happens, has the highest accuracy rate in the entire department. But when an elevator in a new city building goes into total freefall on Lila Mae's watch, chaos ensues. It's an election year in the Elevator Guild, and the good-old-boy Empiricists would love nothing more than to assign the blame to an Intuitionist. But Lila Mae is never wrong.

The sudden appearance of excerpts from the lost notebooks of Intuitionism's founder, James Fulton, has also caused quite a stir. The notebooks describe Fulton's work on the "black box," a perfect elevator that could reinvent the city as radically as the first passenger elevator did when patented by Elisha Otis in the nineteenth century. When Lila Mae goes underground to investigate the crash, she becomes involved in the search for the portions of the notebooks that are still missing and uncovers a secret that will change her life forever.

The divide between Empiricists and Intuitionists seems like a simple ideological divide at first, but that central question becomes more complicated as Lila Mae learns more about Intuitionism's founder while investigating the crash. Lila Mae isn't the first Black inspector, and I'm unsure whether she's the first female one, but the combination of the two means that a nearly endless slurry of sexism and racism are directed her way, either singly or in combination. It's consistent but not constant, and whether and how characters disparage her is part of their characterization and contributes to the worldbuilding as a whole. The antagonists attempt to weaponize her identity for their own gain in a variety of ways, whether from things she chose (being an Intuitionist) or things she didn't choose (being Black and female).

There are long sections which contain delightful thoughts about elevators, including but not limited to competing theories of elevators, how the passenger exists in context with the elevator, where escalators fit in as vertical conveyances, and many more.

The mystery is tense and engaging, I was hooked almost immediately, became riveted about a third of the way in, and was completely engaged through to the end. Lila Mae is purposeful and conscientious, which are excellent qualities for the protagonist of a mystery. Excellently layered, I love this. 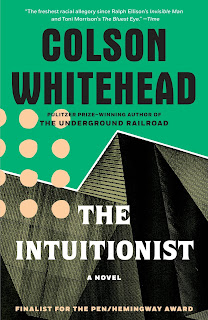