Welcome to the Books That Burn Fortnightly Roundup! Releasing every two weeks (one week early for Patrons). Remember to head to Transcripts That Burn for all available transcripts of the podcast. This month there's a newly-released transcript for OATH OF GOLD by Elizabeth Moon, that means transcripts for episodes covering all three books in The Deed of Paksenarrion trilogy are now available.

We've decided to move to a twice-monthly release schedule for our regular episodes, with Patrons receiving up to one bonus episodes per month depending on their reward tier (Patrons will receive more details in a post before the end of the month). Thank you for bearing with us while we work this out, we love making the podcast and want to have a release schedule that fits with our changing lives.

I'm adding more structure to the review schedule, trying to focus on finishing series I start, and to post the reviews for books in a series closer together so they for a continuous thread rather than being adrift amidst dozens of other posts. To that end, Sundays and Fridays will be reserved for reviews of entire series (one book at a time) of various authors. For the next few months that means on Sundays I'm reviewing books by Ilona Andrews until I run out, and on Fridays I'm reviewing as much of Julie Kagawa's work as I can until I get through all the completed series I can find, then I'll pick another author. I've made a tag for books I'm planning to review in this manner (linked here), please feel free to peruse the list and suggest what I should prioritize.

I tried to clear up my to-read pile a bit and ended up with a bunch of DNFs, none of them will get longform reviews because I figured out pretty quickly that they weren't good fits for me. I'll list them and the reasons briefly:

That list comes from two different DNF days, but at least I found SHADOW OF THE FOX when I was churning through the pile.

If I diverted my attention to read something that doesn't get a review then it's left my memory under the sheer weight of how many Kate Daniels books I read.

Reviews forthcoming for ONLY A MONSTER by Vanessa Len, SOUL OF THE SWORD by Julie Kagawa, and MAGIC BLEEDS by Ilona Andrews.

A MAGIC STEEPED IN POISON by Judy I. Lin, book 1 of The Book of Tea is Fantasy marketed as Young Adult. Ning leaves her village to try and save her sister's life, joining a competition in the palace in hopes of winning a favor from the princess. Told in First Person with Single POV.

SORCERY OF THORNS by Margaret Rogerson, book 1 of Sorcery of Thorns is Fantasy/Romance, with queer character(s), marketed as Young Adult. Elisabeth grew up in a Great Library full of grimoires, taught that sorcerers are evil. When she's blamed for an attack on the library, she turns to a Nathaniel, a sorcerer, to help untangle a centuries-old conspiracy. Told in Third Person with Single POV.

MAGIC BURNS by Ilona Andrews, book 2 of Kate Daniels is Urban Fantasy, with queer character(s), marketed as Adult. Kate is now a liaison between the Guild and the Order, and is drawn into a hunt for a cauldron when undersea undead begin chasing her and the girl she's watching over. Told in First Person with Single POV.

THE MAGNOLIA SWORD by Sherry Thomas is Historical, with queer character(s), marketed as Young Adult. Mulan has been trained to duel the owner of her sword's companion, separated long ago. When conscripted, she joins the army while pretending to be a man, and quickly finds herself the companion to the princeling. Told in First Person with Single POV.

SHADOW OF THE FOX by Julie Kagawa, book 1 of Shadow of the Fox is Fantasy, with queer character(s), marketed as Young Adult. Yumeko is half kitsune, half human, raised by monks in an isolated temple. When her home is burned and the monks are slain, she must travel with a mysterious samurai to reach someone who can take care of the powerful \scroll the monks were guarding. Told in Third Person with Ensemble POVs.

MAGIC STRIKES by Ilona Andrews, book 3 of Kate Daniels is Urban Fantasy, with queer character(s), marketed as Adult. Kate tries to help Derek when he gets in over his head from being head over heels for a girl who's involved in the Midnight Games. Told in First Person with Single POV.

I've started reading a series I used to read a lot in high school, back when I read a bunch of urban fantasy with vampires, werewolves, or both. I'll try not to overwhelm the blog with them, but I will be reading and reviewing a bunch of Ilona Andrews and Patricia Briggs in the near future.

The Ilona Andrews portion of the reviews are going well, I've scheduled those for Sundays until I run out of them. This means you'll get those at a steady pace and not have the blog overwhelmed because I read 6 of 11 from one series in just over a week.

I re-read HAMMERS ON BONE by Cassandra Khaw, but I've already reviewed that one.

For 2022 I'm hosting a reading challenge that lasts the whole year. August's prompt is to read something by an indigenous author, with a bonus prompt to read something by queer indigenous author. Our patrons had a tie vote for A SNAKE FALLS TO EARTH and JOHNNY APPLESEED, so I'll read JOHNNY APPLESEED if I'm able to access it (I read A SNAKE FALLS TO EARTH earlier this year).

INTO THE DROWNING DEEP by Mira Grant is set in July through September(?) 2022 so I'm attempting to read it "as it happened". It's going well, except that this read-through lasts longer than one time checking it out from the library, so that's causing a few issues.

I'm still reading the ARC of WHERE YOU LINGER by Bonnie Jo Stufflebeam, which just came out in July. The stories are very hit-or-miss for me, which is part of why it's taking so long.

At this point my queued-up reviews are stretching far enough into the future that the current reads section is more like a snapshot of the distant future than a near preview. I'm paused in reading A MASTER OF DJINN by P. Djèlí Clark. It's not gripping me as much as some other things I'm reading, so I'll probably finish it but it's not urgent.

I love A DESOLATION CALLED PEACE by Arkady Mardine, I'm savoring it when I need a break from other books.

KAIKEYI by Vaishnavi Patel is excellent, I'm reading it as an audiobook and loving it!

I enjoyed SHADOW OF THE FOX (and its sequels) so much that after I finished that trilogy (reviews forthcoming) I picked up more of Julie Kagawa's work and am in the middle of THE IRON KING (book one of The Iron Fey). I like her later writing better, but I'm having a good time so far.

Because I can't leave you without one more book for the truly ridiculous stack I have right now, I'm halfway through MAGIC BREAKS by Kate Daniels as I write this, but I'll probably have finished it by the time this posts for Patrons since I've been making it through a book a day for over a week now (plus chunks of random others throughout the day).

This time last year I read SHATTER THE SKY by Rebecca Kim Wells. This is the start of a series that I never quite got back to, I should probably try to when I get a chance. 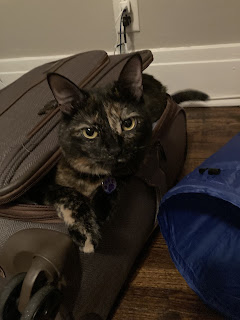