SciFi’s favorite antisocial A.I. is again on a mission. The case against the too-big-to-fail GrayCris Corporation is floundering, and more importantly, authorities are beginning to ask more questions about where Dr. Mensah’s SecUnit is.

And Murderbot would rather those questions went away. For good.

ROGUE PROTOCOL finds Murderbot trying to get answers about its former corporation's past and hoping to avoid being friends with an overly familiar robot and its humans.

I continue to like Murderbot, Miki is adorably annoying, and the mental contortions that Murderbot goes though in order to manage what Miki learns is fascinating. The worldbuilding is gradually accruing as the series continues and I like this style.

It's best to think of this series, in terms of structure, like episodes of a tv show (perhaps one of the serials Murderbot loves so much). It builds on the details of the previous book, and uses the information from it, but there isn't room for fluff. That creates this dynamic where the plot is very self-contained, but some bits of worldbuilding don't get explained again if they were explained before, since there just isn't room to go over stuff that was already covered in detail in a previous book. It doesn't quite wrap up anything from the previous book, though it is now clear that Murderbot has a quest and a goal that its pursuing as the series continues. The main storyline starts here and wasn't present previously, except for the connecting thread that Murderbot was somewhere at the end of the last book and now needs to go somewhere else for its next objective. A pretty important thing is introduced and resolved within ROGUE PROTOCOL. It's not the last book, and Murderbot is poised to continue its quest in the next volume. The main character is the same, and its narrative voice is consistent. Because of the episodic nature of the series, most of this book would make sense if someone picked it up at random without knowing about the series, though there are definitely some terms that don't get re-explained and would have to be inferred from context.

This was great and I'm ready for the next one. 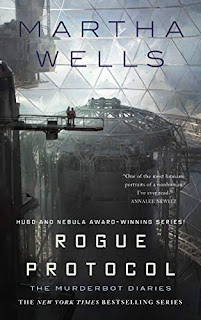