A Magic Steeped in Poison by Judy I. Lin (The Book of Tea #1)

I used to look at my hands with pride. Now all I can think is, "These are the hands that buried my mother."

When Ning hears of a competition to find the kingdom's greatest shennong-shi—masters of the ancient and magical art of tea-making—she travels to the imperial city to compete. The winner will receive a favor from the princess, which may be Ning's only chance to save her sister's life.

But between the backstabbing competitors, bloody court politics, and a mysterious (and handsome) boy with a shocking secret, Ning might actually be the one in more danger.

Ning leaves her village to try and save her sister's life, joining a competition in the palace in hopes of winning a favor from the princess.

A lot of the worldbuilding revolves around every bit of her surroundings looks. The descriptions are usually brief enough to not slow things down too much, but this is a book that makes sure you get a sense of how most rooms (or at least the people in them) appear. There's also a lot of sensory information related to the tea. The magic system is consistent enough to make sense but loose enough to allow for a bunch of cool stuff which fits the kind of thing we know can be done even if it wasn't mentioned before it initially appears.

The audiobook narrator is great, her style fit the story and it was pretty easy to tell everyone apart (even minor characters).

One thing which was a bit frustrating is that Ning kept obsessing (and trying not to obsess) about this guy who at first appears unconnected to the palace but turns out to be much more than he appears. He works well as a plot device but I don't feel like I know anything about him and I don't get why she's interested in him (other than him being mysterious). Plots where people are lying stress me out, and having Ning not seem to know why she was so interested in him made it a bit harder for me to believe their romantic tension as well.

I'm confused by some of the strategies in the competition and the treatment of animals. It's so morally grey (even within the book, as evidenced by the judges' reactions) that it made me wonder if this is actually a villain arc rather than a hero arc. It establishes how far Ning will go to try to get this position and save her sister, but I can't tell whether that's meant to be good or bad.

As the first book in a duology, this ends on a bit of a cliffhanger. Most major things from early in the book get a resolution, but right at the end several things happen which set up a direction for the sequel, but leave this book frustratingly unresolved on some key points. It works in the book, but whether it works for any reader will depend on your tolerance (or desire) for unresolved endings. This is the first half of a specific longer story, and it shows. I'm interested enough to finish that story and find out. 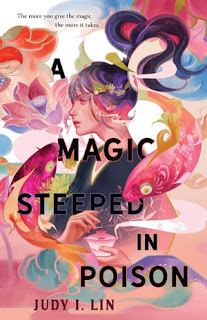