All sorcerers are evil. Elisabeth has known that as long as she has known anything. Raised as a foundling in one of Austermeer's Great Libraries, Elisabeth has grown up among the tools of sorcery--magical grimoires that whisper on shelves and rattle beneath iron chains. If provoked, they transform into grotesque monsters of ink and leather. She hopes to become a warden, charged with protecting the kingdom from their power. Then an act of sabotage releases the library's most dangerous grimoire. Elisabeth's desperate intervention implicates her in the crime, and she is torn from her home to face justice in the capital. With no one to turn to but her sworn enemy, the sorcerer Nathaniel Thorn, and his mysterious demonic servant, she finds herself entangled in a centuries-old conspiracy. Not only could the Great Libraries go up in flames, but the world along with them. As her alliance with Nathaniel grows stronger, Elisabeth starts to question everything she's been taught--about sorcerers, about the libraries she loves, even about herself. For Elisabeth has a power she has never guessed, and a future she could never have imagined.

I like how much of the early worldbuilding revolves around the grimoires and the propaganda Elisabeth was taught about sorcerers. The way Nathaniel leans into her negative assumptions without actually doing anything to hurt Elisabeth or anyone else means that she learns a lot about the kind of person he is by how he reacts to being misunderstood. It's a wonderful bit of worldbuilding-as-characterization and I love how it works out. He lets her think awful things without trying to defend himself, then when she realizes those assumptions don't match how he's actually behaving it gives her an opportunity to realize she was wrong about him. It's a dynamic that repeats itself throughout the book, gradually receding as they learn to trust each other and communicate more forthrightly. One of my other favorite things in the worldbuilding is how the narration assumes the reader has a starting point in that world, specifically of a person growing up in one of the Great Libraries. Once she leaves, Elisabeth learns some of the outside world's differences in a way that enhances the worldbuilding and teaches about her as a character. If she's startled that the world was one way then it implies that her experience of the Library was different in a specific manner. Immersive worldbuilding is a favorite of mine, and this perfectly fit the kind I like.

Silas is enjoyable as a character whose present form is unassuming but could absolutely fuck someone up if a different version of himself is let loose (Think Mogget from The Old Kingdom books by Garth Nix, but if he liked working).

***Minor spoilers in this paragraph.*** I thought the first half was just fine (except for the worldbuilding, which was excellent) and then I loved the ending. I didn't enjoy the matrons speculating about Nathaniel's sexuality, and while the resolution of his identity came though his own telling, it felt a bit off. Nathaniel doesn't want to be treated as a stud for his bloodline (completely understandable) so he turns away hordes of eligible women. Their mothers are upset and speculate that he might be gay (because obviously it must be he doesn't want a woman at all, not that he doesn't want any of their daughters). It made the reveal that he likes men and women feel a bit like Elisabeth is the exception that proves the rule. On the one hand, I'm excited for a bi character getting a m/f relationship because his queerness isn't dependent on his partner's identity. On the other hand, it made it feel like he's bi so that the narrative can tease his dynamic with Silas. There's no jealousy from Elisabeth on their intimacy, which I appreciated, but altogether it left me unable to enjoy Elisabeth and Nathaniel as much as I wanted. ***End spoilers***

The audiobook performance (particularly for Silas) perfectly fits each character and really enhanced the story. The plot noticeably had distinct stages (not in a bad way). It's a long enough book to have several points of tension and rest, with the danger escalating in a way that felt appropriate to the world and to what the characters had already faced. There were a couple of points in the latter half where things had been so dramatic that I thought maybe it was about to pull a cliffhanger, but the ending is very satisfying and comes at an appropriate point in the pacing.

I enjoyed this and am very excited for a sequel if one materializes. It's listed as a series so I'm hopeful. 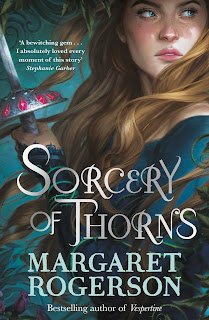