As a mercenary who cleans up after magic gone wrong, Kate Daniels has seen her share of occupational hazards. Normally, waves of paranormal energy ebb and flow across Atlanta like a tide. But once every seven years, a flare comes, a time when magic runs rampant. Now Kate's going to have to deal with problems on a much bigger scale: a divine one.

When Kate sets out to retrieve a set of stolen maps for the Pack--Atlanta's paramilitary clan of shape shifters--she quickly realizes much more is at stake. During a flare, gods and goddesses can manifest and battle for power. The stolen maps are only the opening gambit in an epic tug of war between two gods hoping for rebirth, and if Kate can't stop the cataclysmic showdown, Atlanta may not survive...

Kate starts watching over Julie, a young girl whose mom has vanished while worshipping in a coven who can't keep their crows straight (a dangerous thing in a world alternatingly drenched in magic and tech). Julie is one of my favorite characters in the series and her first appearance here sets the tone of their relationship for the next few books. This also is the first book to feature Andrea, an excellent markswoman who loves the Order and guns. The dynamic between Kate and Curran is emotionally charged in a way that currently is tilting towards mutually consensual violence but Curran seems to be making subtle (and not-so-subtle) moves in a more sexual direction that Kate hasn't yet reciprocated.

This picks up on the last known status of a bunch of plot threads but isn't trying to wrap them up, really (except for Crest). It continues Kate's entanglements with the Pack and the People, and shows her involvement with the Mercenary Guild and the Order but isn't focusing on them as much this time around. There's a new storyline featuring some new characters (a few who won't continue past here and some who will be series regulars), but even that has a connection to a minor character who appeared in MAGIC BITES. That storyline has a major thing that is both introduced and resolved in this book. There are several things explicitly left for later which involve changes to the status quo. The main character is still Kate, her voice is consistent with the previous book. It might make sense to start here because this is laying so much groundwork of its own, but the dynamic between Kate and the Pack (specifically but not only Curran) definitely benefits from being read after the first book, since otherwise Curran's strong personality can be a bit off-putting when it lacks the context of Kate's opening salvo to their interactions in MAGIC BITES.

This book begins with a map theft and stays pretty focused on the characters important to that initial incident, while building out the world in specific ways. This introduces the witch covens as an important power in the city, shows some factions within the Pack, and deals with a different set of gods that are upsettingly more relevant during the Flare. Bran, Andrea, and Julie provide three completely different sets of problems and opportunities, keeping this from feeling like just a stepping stone to later books. 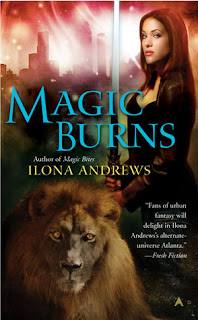