Drafted into working for the Order of Merciful Aid, mercenary Kate Daniels has more paranormal problems than she knows what to do with these days. And in Atlanta, where magic comes and goes like the tide, that's saying a lot.

But when Kate's werewolf friend Derek is discovered nearly dead, she must confront her greatest challenge yet. As her investigation leads her to the Midnight Games--an invitation only, no holds barred, ultimate preternatural fighting tournament--she and Curran, the Lord of the Beasts, uncover a dark plot that may forever alter the face of Atlanta's shapeshifting community...

After Derek is attacked, Kate is pulled into the secret world of the Midnight Games to find out what's behind a mysterious new team.

There’s a lot of new worldbuilding related to the Midnight Games and recent shapeshifter history, but otherwise this leans on details established earlier (with a bit of new Roland lore, as usual). The Games and the background of the Reapers are complex enough to be substantial contributions to the setting, so I don’t think this is missing anything on the worldbuilding front. It follows the trend of dealing heavily in folklore from a specific part of the world (the in-universe explanation is that magical things from similar pantheons or regions tend to clump together when they manifest).

This is a pivotal moment in the series, it changes the status quo on several fronts (or at least makes clear things which were developing already but weren't yet concisely shown). It contains two of my favorite moments from the early books: Kate's retrieval of Julie from school, and Raphael's first big move in his courtship. The way the shapeshifters court provides a lot of the lighter moments in an otherwise pretty traumatic series, and that begins in earnest with this book.

This continues several things from the previous books but I can’t think of any which are completely resolved here. There’s a new storyline which makes sense in light of prior events but is mostly contained here. The ending specifically leaves several things to be continued later. The main character is still Kate, and her voice is consistent with the previous book. This could mostly make sense if someone started here and hadn’t read either of the previous books, but this series has an antagonistic slow-burn romance at the core of it, and while I don’t think it is a toxic relationship, it’s definitely one which would feel weird if this book were your introduction to it. The main plot about the Midnight Games is clear enough to be understandable without knowledge from prior books.

I enjoy a lot of moments here but it isn't my favorite overall. Since it deals with the newly introduced and relatively insular world of the Games, it feels like it's a bit set apart from the books that come before and after it. It's an inflection point, critical in the sequence but odd relative to what surrounds it. 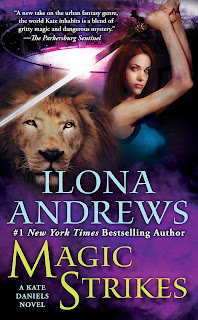